The leaders of Syria and Lebanon agreed on Saturday to normalise their fraught relations in a diplomatic coup for French President Nicolas Sarkozy on the eve of a summit to launch a Union for the Mediterranean. 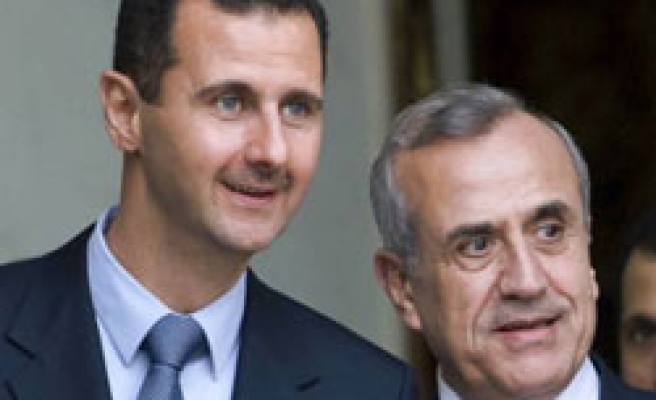 Syrian President Bashar al-Assad, basking in a diplomatic rehabilitation in Europe three years after he was frozen out over the assassination of former Lebanese Prime Minister Rafik al-Hariri, confirmed that the two countries planned to open embassies in each other's capital for the first time.

Speaking alongside Sarkozy and Lebanese President Michel Suleiman, Assad said: "We can say that Lebanon has moved from being a zone of turbulence, a war zone, to a more pacified zone when the Lebanese, and only the Lebanese, have the right to determine their own future."

He also asked France to play a role, alongside the United States, in supporting direct talks between Syria and Israel.

But he said he did not expect such negotiations until President George W. Bush leaves office next January because the current U.S. administration was not interested in Middle East peace.

Sarkozy called Assad's announcement of diplomatic relations with Beirut "absolutely historic" and a great step forward for Lebanon, but he acknowledged that some legal issues remained to be resolved.

Assad's red-carpet welcome in Paris was a stunning turnaround for a leader shunned by Sarkozy's predecessor Jacques Chirac, a close friend of Hariri.

The French leader also claimed credit for bringing together the leaders of Syria and Israel for the first time in the same room at Sunday's launch of the Union for the Mediterranean, grouping 43 Mediterranean and European Union countries.

However diplomats said there were no plans for a handshake or a private meeting between Assad and Israeli Prime Minister Ehud Olmert, and even a group photo seemed improbable.

Senior officials meeting on the eve of the conference failed to resolve differences over how to address the Middle East peace process, a role for the Arab League, and the issue of weapons of mass destruction in a planned joined statement, diplomats said.

But they said there was now consensus that France and Egypt would co-chair the new organisation for the first two years. Foreign ministers will try to settle the remaining differences on Sunday morning.

Turkey's foreign minister said Ankara would play an active role in the new grouping despite initial fears that Sarkozy devised it as an alternative to Turkish EU membership, which he has long opposed.

"Regarding the initiative of a Union for the Mediterranean, we think it will promote peace, stability and development in the region, and Turkey supports this initiative," Foreign Minister Ali Babacan told a news conference.

Babacan said Ankara's role would be the same as in the existing Euro-Mediterranean partnership, known as the Barcelona process, which France says needs revitalising.

Paris has insisted its project has no bearing on Turkey's EU ambitions and a senior French source has said France would not halt the opening of negotiations on new EU policy areas with Turkey during its six-month EU presidency provided they did not involve five "chapters" that presuppose eventual membership.

France's original plans to create a club reserved solely for Mediterranean states had to be amended in the face of opposition from northern EU states, led by Germany, which feared that Paris was seeking to limit their influence while making them pay.

German Chancellor Angela Merkel, who criticised the initial design of the initiative as divisive, gave the final version her backing in her recent podcast.

"In future, we want to discuss the problems with the nations around the Mediterranean from a position of equals," she said, citing aims such as combating the flow of asylum seekers jointly and working to develop the infrastructure, economy and education system of southern Mediterranean countries.

France has had to drop some proposals, such as plans for a Mediterranean investment bank, and critics say that what is left is just a handful of projects that are little different from what the Barcelona process was working on.