A senior diplomat in Syria's London Embassy said Damascus had not received any invitation to start negotiations for peace with Israel, either from the United States or from any other party. 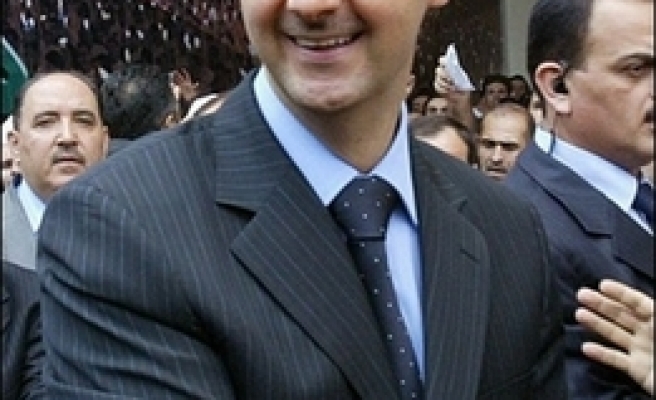 A senior diplomat in Syria's London Embassy said Damascus had not received any invitation to start negotiations for peace with Israel, either from the United States or from any other party, Israel Radio on Friday quoted the Qatari newspaper Al Sharq as saying.

The report comes a day after another Syrian official said Damascus is interested in renewing the peace process with Israel, following similar remarks by Prime Minister Ehud Olmert on Wednesday.

According to the reports, the Syrian diplomat said Friday that Prime Minister Ehud Olmert's government had suffered a route during the Second Lebanon War, and is thus incapable of serving as a real partner for peace with Syria.

Nevertheless, he stated that Damascus is always willing to renew the peace process.

Israeli newspaper Yedioth Ahronoth reported Friday that Israel recently sent secret messages to Syria, signaling its willingness to give up the Golan Heights in return for a peace deal that would require Damascus to distance itself from Iran.

Quoting officials close to Olmert, the paper said that the prime minister had German and Turkish diplomats relay to Syrian President Bashar Assad that Israel is willing to hold direct peace negotiations and give up the strategic plateau, captured in the 1967 Six-day War.

Syria did not respond to Olmert's messages, the report said.

Orlev concluded by saying: "The Golan will not be sold like Gush Katif," referring to the settlement block evacuated in Israel's pullout from the Gaza Strip in 2005.

Meanwhile, Minister of Housing and Construction Meir Sheetrit (Kadima) said Friday a dynamic of dialogue has been created between Israel and Syria, and he hopes this will calm tensions in the North, and will constitute the beginning of a peace process.

Sheetrit told Israel Radio that he is prepared for Syrian sovereignty over the Golan Heights, but only in an arrangement whereby Syria leases the Golan to Israel for a period of 25 years. After this time if there is a real peace with Syria, he said, the Golan is less important to Israel - implying that the territory could then be fully transferred to the Syrians. If, however, it appears that there is no peace then the Golan is "very important," inferring it should not be handed over.

A Syrian official said earlier Thursday that Damascus is interested in renewing the peace process with Israel.

"Our stance remains as it was. We are ready to renew negotiations for peace, and interested in working for peace," the Syrian official told the French news agency, Agence France-Presse.

With reference to Olmert's call Wednesday for a renewal of direct negotiations with Syria, the Syrian official said: "Syria is following the Israeli announcements very closely."

Nevertheless, he emphasized: "We don't have any high hopes that things will change."

Army Radio on Thursday evening quoted former foreign minister Silvan Shalom of the Likud as saying that Israel must be attentive to signals of peace coming from Syria, but simultaneously, be ready for any scenario.

"We must aspire to achieve peace, but at the same time not close our eyes," he said.

Shalom emphasized that any move involving Damascus must be coordinated with the United States and the Arab states, the radio said.

Herzog, who is currently attending a conference on anti-Semitism in Romania, added "the problem with Syria is its proximity to and cooperation with Iran, and Syria's continuing aid to Hezbollah and Hamas."