Syrian President Bashar Assad, the sole candidate, cast his vote at a polling station Sunday as part of a one-day public referendum to endorse him for a second term. 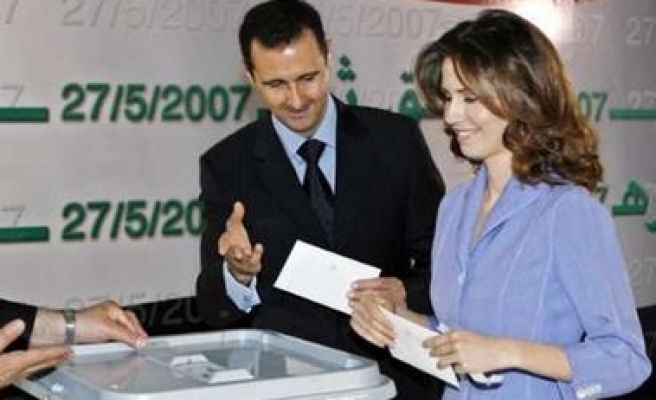 Syrian President Bashar Assad cast his vote at a polling station Sunday as part of a one-day public referendum to endorse him for a second term.

Assad, who is the sole candidate and guaranteed a victory, did not speak to reporters after he voted.

Most of the nearly 12 million eligible voters, out of Syria's 18.6 million population, are expected to support Assad's re-election to a seven-year term. Though Assad's name is the only one on the ballot, voters can either approve or reject his second term.

The 42-year-old British-educated ophthalmologist became president seven years ago after the death of his father, President Hafez Assad. Earlier this month, the parliament, dominated by a pro-government Baathist coalition, unanimously nominated Assad for another term.

Many Syrians expressed their support for Assad including voter Bassam Asfar.

"Yes to the one who has stood in the face of U.S. plans and said no to all pressures facing Syria," Asfar, 48, said outside a polling station.

But members of the Damascus Declaration, the broadest coalition of Syrian opposition groups, boycotted the referendum, said Hassan Abdul-Azim, a spokesman for the Arab Socialist Union.

Abdul-Azim said the opposition has demanded constitutional amendments calling for increased political representation from other parties.

"We called for the amendment ... so that nominations could not be restricted to the Baath Party and give a chance to other candidates to run for presidency," he said.

Syria has witnessed celebrations over the past weeks in preparation for the referendum and more are expected after the results are released. On Thursday, about 300,000 people jammed Damascus streets in a rally said to have been the largest ever here.

The phrase "We love you" has been plastered on walls and cars, and is also the title of a new song, made especially for the event, that blares from loudspeakers, cars and shops.

Several newspapers also showed their support for Assad. On Sunday, Al-Thawra government newspaper printed a large thick red "yes" on its front page, saying in an editorial, "We elect you because we love Syria. ... We discovered that you did not accept humiliation."

On July 10, 2000, a month after his father's death, Bashar Assad won 97.29 percent approval in an election in which he was the only candidate.

The young leader raised high hopes among Syrians when he came to power, leading a campaign to modernize the country with several economic reforms and freeing hundreds of political prisoners.