Hundreds of thousands of Syrians thronged the capital to support a second seven-year term for President Bashar Assad. 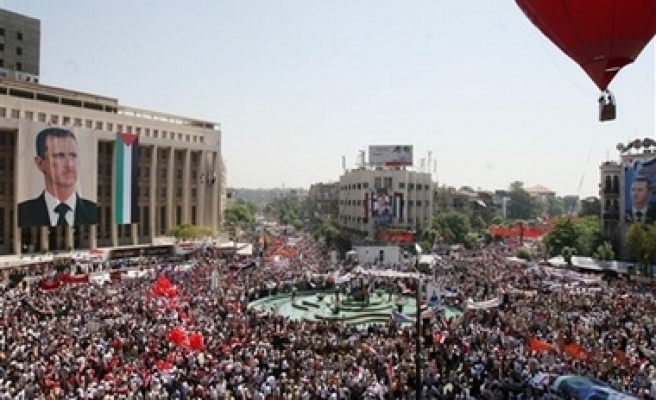 Hundreds of thousands of Syrians thronged the capital Thursday to support a second seven-year term for President Bashar Assad.

The rally came ahead of a referendum Sunday when voters are expected to approve a second mandate for Assad, who succeeded his father, Hafez Assad, in 2000 at the helm of Syria's autocratic regime. There are no other candidates.

The demonstration was headed by a number of Syrian officials and ministers.

It was one of several rallies held across the country since parliament, dominated by the ruling Baath Party, unanimously nominated 41-year-old Assad for a second term.

Celebrations have been held throughout the country and are expected to continue until after the referendum. Thursday's demonstration was deemed to be the largest of the ongoing campaign.

Streets in Damascus are lined with posters of Assad and of a large fingerprint as a show of support for the president: In the previous referendum, many Syrians had dipped their thumbs in their own blood or in ink to stamp the referendum bulletin in his favor.

A new song released for the referendum under the title "We love you" blares from speakers of cars and shops.

"I will elect Assad, because he is the best," said Sharif Kawkabi, 25, a driver. "Had there been hundreds of candidates for presidency, I would still choose him."

Bashar raised hopes among Syrians when he came to power, leading a campaign to modernize the country with several economic reforms and freeing hundreds of political prisoners.

But the president has since clamped down on pro-democracy activists, showing the limits of his reforms and attracting harsh criticism from human rights groups.