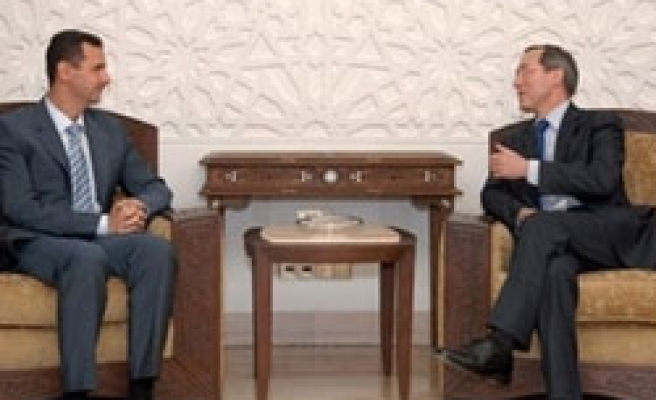 Talks during the meeting discussed bilateral relations and latest development in the Middle East, particularly in Lebanon, the peace process and the Syrian-Israeli track, and the initiative for the Mediterranean Union.

The talks came ahead of a planned visit next month by Assad to Paris.

Relations were damaged by charges of alleged Syrian involvement in the February 2005 assassination of former Lebanese premier Rafiq Hariri, a friend of then French president Jacques Chirac. Damascus has denied the claims.

Two months after the Hariri murder, Syria withdrew its troops from Lebanon in the face of intense international and Lebanese domestic pressure, ending a military presence of nearly three decades.

After the election last month of a new president in Lebanon under a power-sharing deal between rival politicians, Sarkozy made good on a pledge to restore high-level contacts with Syria.

Sarkozy has invited Assad to attend a July 14 national day military parade in Paris after a summit in the French capital to launch a new Mediterranean Union.

US Secretary of State Condoleezza Rice on Saturday said she voiced confidence that France would send the "right message" to Assad when he visits Paris, after her initial reservations shared by the anti-Syrian camp in Lebanon.

'I don't have any doubt that any contact with Bashar Al Assad will be from our point of view contacts that communicate the right messages on what are shared French and American goals... in the Middle East,' she told reporters.

US President George W. Bush and Sarkozy have jointly pressured Syria to break ties with closest regional ally Iran, end its support for Palestinian insurgentcy groups, and set up formal diplomatic ties with Lebanon for the first time.

'Syrian officials have stated repeatedly that Syria has no problem with opening an embassy in Lebanon after the formation of a Lebanese government of national unity,' Elias Mourad said.

In other diplomatic moves, Syria is due to hold a new round of indirect peace talks with Israel later this month, three weeks after they announced the start of Turkish-mediated negotiations following an eight-year freeze.

Assad said earlier this month that however direct peace talks with Israel were unlikely before 2009, adding they also depended on the fate of Prime Minister Ehud Olmert, who has been dogged by calls for his resignation over a graft scandal.

Syria is also due to receive later this month UN inspectors who are probing claims it was building a nuclear facility with North Korean help, allegations denied by Damascus.

The site of Al Kibar in northeast Syria on the Euphrates river was bombed and destroyed by Israeli warplanes in September.