There is speculation the two could meet on the sidelines of a summit of European and Mediterranean countries on July 13 in Paris. 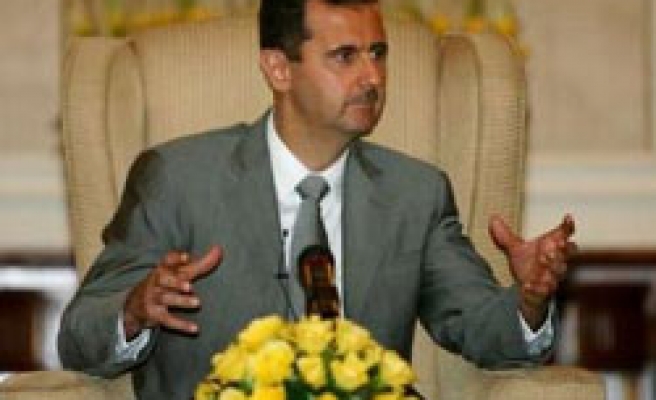 Syrian President Bashar al-Assad on Thursday ruled out holding direct talks with Israeli Prime Minister Ehud Olmert on the sidelines of an international summit to be held in Paris next month.

Assad said on Thursday he needed to see more progress in Turkey-mediated indirect peace talks with Israel before he agrees to a meeting with the Israeli prime minister.

There is speculation the two could meet on the sidelines of a summit of European and Mediterranean countries on July 13 in Paris.

"This is not like drinking tea," Assad, in India on a four-day visit, said when asked if he would meet Israeli Prime Minister Ehud Olmert in Paris.

"The meeting between me and the Israeli prime minister will be meaningless without the technocrats laying the foundation, without reaching the final stage." Israel and Syria concluded a second round of indirect peace talks on Monday and agreed to continue the negotiations over the fate of the Golan Heights in July.

Syria is demanding Israel return all of the water-rich plateau, which Israel captured from Syria in the 1967 Middle East war.

Israeli officials have repeatedly said a peace deal depends on Damascus distancing itself from Iran and severing ties with groups such as Hamas and Lebanon's Hezbollah.

Both groups are supported by Iran and Syria, which hosts a number of Palestinian factions opposed to existing Israeli occupation.

Assad has dismissed Israeli demands the country abandon its alliance with Iran and groups like Hamas and Hezbollah as a requirement for peace.

Calling the Turkey-mediated talks "some glimmer of hope", Assad said the Israeli government needed do more if it wanted a meeting between him and Olmert.

"Only sending signals without real result is meaningless," he said. "The last few weeks we had some glimmer of hope after indirect negotiations with the help of Turkey."

Turkish Foreign Minister Ali Babacan said on Tuesday that Israel and Syria would hold a new round of indirect peace talks mediated by Turkey in July after two earlier rounds of indirect talks ended successfully.

The last direct talks -- between then Israeli Prime Minister Ehud Barak and Syrian Foreign Minister Farouq al-Shara -- stalled in 2000 in a dispute over how much of the Golan Heights should go back to Syria.

Damascus is firm in demanding all the Golan.