China's unveiling of the Olympic torch route for the 2008 Games has sparked controversy in Taiwan which has refused to allow the local leg of the run. 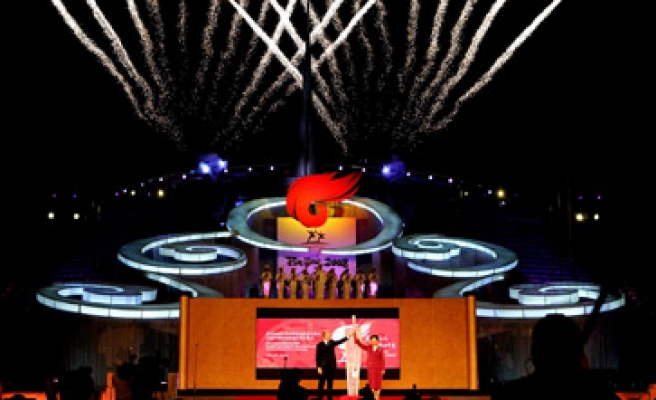 China's unveiling of the Olympic torch route for the 2008 Games has sparked controversy in Taiwan which has refused to allow the local leg of the run.

"It is something that the government and people cannot accept," Tsai Chen-wei, the head of Taiwan's Olympic Committee, said in the Taiwan capital, Taipei.

The move came hours after Thursday's announcement of what would be the longest torch relay in Olympic history, spanning 137,000 km over 130 days across five continents including scaling Mount Everest.

But Taiwan flatly rejected being included in the route saying it was an effort to play politics.

On Friday, five Americans were expelled by China for staging an Olympics-related protest on Mount Everest to challenge China's rule over Tibet.

The five unfurled banners reading "One World, One Dream, Free Tibet 2008" at a base camp of the world's highest mountain.

The Chinese foreign ministry said that the five were detained for "carrying out illegal activities aimed at splitting China," and that they had been expelled according to Chinese law.

Taking the Olympic torch to the top of the 8,850m Mount Everest is seen by some as a way for Beijing to underscore its claims to Tibet, and is expected to be one of the relay's highlights.

Taiwan officials said they had informed Beijing earlier this week it would reject a place on the torch relay if the flame entered or exited the island via mainland China or Hong Kong and Macau, which are Chinese-controlled but semiautonomous.

As a compromise, the organisers, the Beijing Olympic organising committee (BOCOG), said the torch would pass from Vietnam's Ho Chi Minh City to Taipei and then to Hong Kong.

"I sincerely hope that Taiwan compatriots can enjoy the glories and joy of the torch relay," said Jiang Xiaoyu, a vice president of the Beijing Olympic organising committee.

The Olympic torch is also mapped to pass through the Himalayan region of Tibet, another political hotspot which has been under Chinese control for more than half a century.

The controversy over Taiwan dimmed the gloss on Beijing's high-profile announcement of the Olympic torch route.

Taiwan split from mainland China in 1949 after Nationalist troops retreated to the island following the communist seizure of power.

Today Beijing regards Taiwan as a renegade province, while the island's democratically-elected government has made increasing indictations that it wants to declare formal independence from the mainland.

Thursday's nationally-televised torch relay event included a video laying out the proposed route, which begins in Greece before making its way across continents to ignite the cauldron at the National Stadium in Beijing on August 8 next year.

"It will be a relay that will cover the longest distance and be most inclusive and involve the most people in Olympic history," Liu Qi, the head of Beijing's Olympic organising committee, said at the unveiling ceremony.