Talks between Iran and U.S. begin amid spy row in Iraq

The United States and Iran began talks on Monday, resuming public diplomacy for the first time in nearly three decades in the meeting between ambassadors. 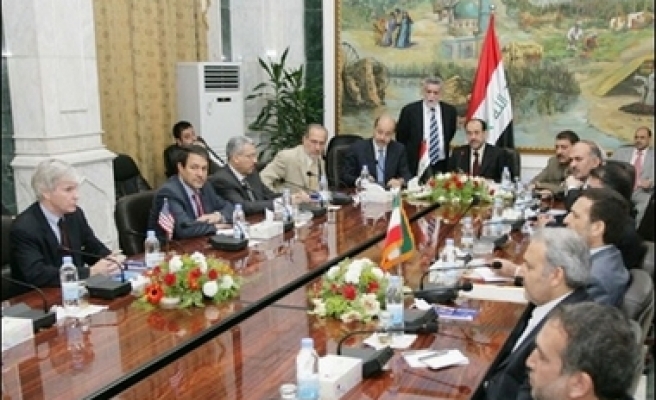 The United States and Iran began talks on Monday, resuming public diplomacy for the first time in nearly three decades in the meeting between ambassadors on security in Iraq.

Just before 10:30 a.m., al-Maliki greeted the two ambassadors, who shook hands, and led them into a conference room, where the ambassadors sat across the table from each other. Al-Maliki then made a brief statement and left the room. Iraq was being represented at the talks by National Security Adviser Mowaffak al-Rubaie.

Will this first meeting, as the Iraqis openly hope and as the Iranians and Americans may quietly aspire, be sufficiently cordial and productive that a second meeting becomes possible? Should that happen, will a future dialogue involve higher-level officials — perhaps Secretary of State Condoleezza Rice and Iranian Foreign Minister Manouchehr Mottaki?

On Saturday, Crocker was circumspect when asked about prospects for further meetings.

"It's going to start with one meeting and see how it goes," Crocker said. "We're coming prepared to talk about Iraq."

"The two sides can be hopeful about the outcome of the negotiations, if America develops a realistic view toward Monday's talks, admits its wrong policies in Iraq, decides to change them and accepts its responsibilities," Mottaki said in Tehran.

A political aide to al-Maliki told The Associated Press that Iraq hoped to play a mediator's role in easing tensions between the Americans and Iranians, which Iraqi officials have routinely said are being played out in Iraq.

Many small issues could cloud the talks before they begin. There were U.S. Navy exercises in the Persian Gulf last week and tough talk from President Bush about new U.N. penalties against Tehran over its nuclear program. The United States says Tehran is trying to build a bomb, while Iran says it needs nuclear technology for energy production.

Further complicating the talks, Iran said Saturday that it had uncovered spy rings organized by the United States and its Western allies.

Iran accuses the U.S. of improperly seizing five Iranians in Iraq this spring. The U.S. military is holding the five. Iran says they are diplomats; Washington contends they are intelligence agents.

The U.S. also has complained about the detention or arrest of several Iranian-Americans in Iran in recent weeks. State Department spokesman Tom Casey said that issue was not on the U.S. agenda for Monday.

Regardless, the Baghdad talks are the first of their kind and a small sign that Washington thinks rapprochement is possible after nearly three decades of animosity.
Last Mod: 28 Mayıs 2007, 12:47
Add Comment