A flotilla of rebel boats raided a navy camp in northern Sri Lanka early Thursday, government and rebel officials said, and hours later a bomb exploded near an army bus passing through a crowded street in the capital, wounding seven people. 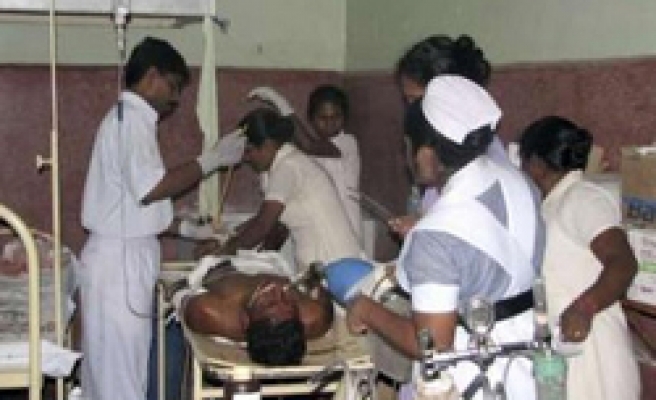 A flotilla of rebel boats raided a navy camp in northern Sri Lanka early Thursday, government and rebel officials said, and hours later a bomb exploded near an army bus passing through a crowded street in the capital, wounding seven people.

The separatist Tamil Tiger rebels claimed to have killed 35 sailors in their attack on the navy base in the village of Delft, but that could not be confirmed.

They attacked the base with 15 boats, navy spokesman Commander D.K.P Dassanayake said. Navy sailors sank one of them, he added.

"The fighting lasted only 20 minutes and we completely overran the camp," Ilanthirayan said. The rebel forces then fled the scene by boat.

The military had no details on casualties in the attack. The military and rebels routinely deny and contradict each other's casualty tolls.

The bomb, which was attached to a motorcycle parked in a crowded shopping area near the port, exploded as the bus went past. Four soldiers and three civilian were wounded, he said.

Passers-by rushed to help the victims.

"Soon after the explosion, the bus burst into flames, and then I brought the injured to the hospital," said Colombo resident Chandana Mahanama, who was traveling in his car just behind the bus when the bomb went off.

The violence occurred one day after the International Committee of the Red Cross announced it had withdrawn its staff from two checkpoints between government-held and rebel areas in northern Sri Lanka because of escalating violence.

On Wednesday, at least 15 people were killed in a roadside bomb and in clashes in northern and eastern Sri Lanka, the military said, in worsening violence that has shattered an internationally backed cease-fire.

The rebels have fought the government since 1983 to create a separate homeland for the island nation's minority ethnic Tamils, who have suffered decades of discrimination under the Sinhalese-dominated government.

Nearly 70,000 people have died in the conflict, including about 5,000 killed since December 2005, when violence flared despite a 2002 cease-fire that is now in tatters.