African and Turkish businessmen started business negotiations on the second day of the second “Turkey-Africa Trade Bridge” summit in İstanbul. The bilateral talks were kicked off by Foreign Trade Minister Kürşad Tüzmen together with the guest African mini 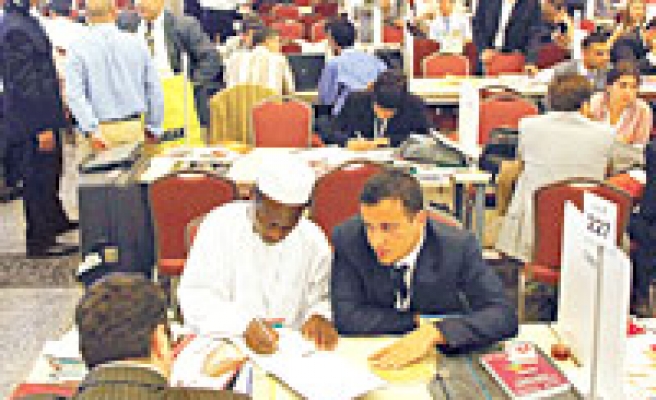 African and Turkish businessmen started business negotiations on the second day of the second “Turkey-Africa Trade Bridge” summit in İstanbul. The bilateral talks were kicked off by Foreign Trade Minister Kürşad Tüzmen together with the guest African ministers.

The summit, organized by the Turkish Confederation of Businessmen and Industrialists (TUSKON), is offering the opportunity to bargain and strike business deals to around 1,000 African and 1,600 Turkish businessmen. Nearly 700 translators, meanwhile, are working to assist the negotiating businessmen. TUSKON Chairman Rızanur Meral released official estimates from the Foreign Trade Undersecretariat that the total amount of agreements in the summit would exceed $2 billion. He had asserted on Wednesday -- the first day of the summit -- that the businessmen would shake hands for an estimated $500 million worth of agreements.

“Everyone here is a real businessman; these aren’t artificially inflated figures,” he said, adding that considerable steps have been taken so far in the negotiations. Meral also gave the example of a TUSKON member who just sold two containers of disposable diapers to Angola. Meral also noted that most of participants of last year’s summit came again since they found the occasion extremely beneficial for them.Many diamond producers joined in the summit, who according to Meral said “We wish to remove the middlemen and cut jewelry prices by half so that every woman can have a solitaire on her finger.”

Africa is being represented by prominent businessmen who want to establish partnerships in Turkey. Marcelino Oyono Ntutumu, the chairman of Agencia De Viajes, one of the most influential conglomerates of Equatorial Guinea, is one of them. Ntutumu came to Turkey by his own private plane on Wednesday and immediately after landing went to İstanbul’s Tuzla district to visit shipyards there. Ntutumu has stated that his company is interested in establishing partnerships with Turkish companies, especially in the fields of construction, construction materials, agricultural machinery and naval transportation.

Ntutumu said his country’s doors are wide open for Turkish investors. “Oil was found in our country after 1990, and now we are the third-largest producer in Africa. We earn $10 billion a year from oil and are spending this money on infra and superstructure projects and industrial investments. We want to act together with Turkish businessmen,” he said. Equatorial Guinea offers foreign investors many advantages, he added.

Josephine Sougem, owner of the Nkouam & Fils company from Cameroon, said she had come to Turkey for the first time and had already engaged in fruitful negotiations on construction and decoration. “The first container will be loaded in six months,” Sougem said, adding that she liked the design and quality of Turkish products. Four participants from Cameroon attended the summit last year, whereas this year 50 businessmen participated, Sougem noted. Praising Turkish schools in her country as setting a good example for Turkish-African relations, Sougem said, “Next time, I am planning to visit here with my family just for a vacation.”

Nigerian-based Duada, the only auto manufacturer among 20 African countries, is looking for Turkish partners. Duada Manager Mohammed Sani Soba Duada is planning to invest in Turkey and accordingly conducted talks at the trade bridge summit. Duada became the only producer in its country after it bought Peugeot Automobile Nigeria (PAN), which had been operating in the country for 32 years, in early 2007. Duada stated that their factories employ more than 1,500 workers and produce 25,000 cars annually; 25 percent of production goes to foreign markets as exports, while the remaining is sold on the domestic market. “We are importing spare parts from France. We are planning to buy replacement parts from Turkey or produce them here,” Duada said. He explained his presence at the summit with the following words: “Turkey is one of the most important economies of the world and, as Africa, we don’t want to stay of this great potential. We want our people to benefit from Turkey’s wealth.”

Turkish businessman Erdoğan Akbaş said he had decided to invest in Malawi as a result of talks at the first summit on May 2006. Akbaş set up a furniture workshop there on a 10,000-square-meter plot with an initial investment of $400,000. He explained that this workshop is producing office and home furniture. Most Malawian furniture makers had not used mechanical tools until Akbaş went there last year, he claimed. The entrepreneur expressed his satisfaction with the Malawian market and added that he now plans to open another establishment, this time in Nigeria. “I have been talking to Nigeria’s Promotion and Investment Office. They promised to offer me a 20,000-square-meter parcel of land for investment,” he revealed.

Malawian businessman Yahya Hubbiddin Yahya is also participating in the summit for the second time. He wishes to construct a school and private infirmary in his country and seeks partners. “A school could be established with just $500,000,” Yahya said, adding that his state is offering alluring incentives to foreign investors. Malawi is rich in minerals, especially copper, and top-quality granite is abundant there.

Not only business but also soccer has been on the meeting’s agenda. The Democratic Republic of Congo’s Saint Luc soccer team has come to İstanbul to sign good players and strengthen their squad. Club owner Willy Mutombo says they have offered to become “brothers” with some Turkish clubs, meaning they would have a shared junior squad facility. Mutombo says they have also sold some players to French clubs. European countries are scouting for talented and cheap players throughout African countries every year, and many European clubs are setting up “brotherhoods” with African clubs, he added.

Deputy Minister of Commerce Manuel Cruz Neto, Angola: Angola is growing rapidly; oil and diamonds are important industries and their trade volume is increasing. Yet the effects of the 30-year war still continue. We are looking for partnerships from Turkey and we are expecting support from Turkey for infrastructure investments in agriculture, industry and finance. There may be some problems in trade, but there are still great opportunities. Turkey has the capability and Africa has the potential. We can cross this bridge together.

Minister of Culture and Commerce Youssouf Abassalah, Chad: We were welcomed very well, right from our landing at the airport. This [meeting] shows a natural collaboration and built a natural bridge to the future of Africa. We are waiting for investors to provide economic diversity in oil-rich Chad.

Health Minister Makwenge Kaput, Democratic Republic of Congo: I want to say three messages from my country: Congo citizens want me to convey their fraternity; Africa is still alive, and democratic elections have been held since the war; and lastly my republic is like a development plot and needs your profession for its reconstruction.

Foreign Minister Pator Micha Ondo Bile, Equatorial Guinea: The uniqueness of the meeting underlines the importance of commercial relations settled in the forum. Turkey has achieved great successes, and we want to benefit from its experiences.

Minister of Commerce and Industry Girma Birru, Ethiopia: The main problems for Africans are developing sustainable growth and reducing poverty. There is a need for more foreign capital. We will give priority to ready-to-wear and construction materials production. Turkey is really a good trade partner. We are expecting investments in the agricultural, textiles and leather industries.

Commerce Minister Samia Suluhu Hassan, Tanzania: Tanzania has a population of 1 million and its per capita income is $320. We want to change the economic shape of the country and are expecting new investments. I propose that Turkish investors use my country to access the East Africa markets.

Minister of Commerce Ali Abdulaziz Al İsavi, Libya: Trade [between Turkey and Africa] increased to $15 billion from $5 billion. These numbers are unbelievable. This bridge is not only a trade bridge, it is also an investment bridge. These have to be carried out together. You can see Libya as a window to the whole of Africa.

Commerce Minister Habi Mahamadou Salisu, Niger: This is the second time we have come here, the Turkish Confederation of Businessmen and Industrialists (TUSKON) is building this bridge for the second time. We passed across the bridge last year and provided many Turkish investors [with the opportunity] to invest in Africa. We want to overcome poverty in my country with Turkey’s help. We did not come here alone, we came here with businessmen. Come and invest in Niger, but learn about it first. There is serenity and happiness there.

Minister of Commerce Rosalie Koudougueret Mologbama, Central African Republic: Our country is at the heart of Africa. Four million people live in 600,000 square kilometers. We are signing many trade deals, but we hope we can sign the most important deal with Turkey.