Tens of thousands of Kasmiri protest at UN office

Demonstrators shouting "Oh tyrants and oppressors leave our Kashmir" marched to police barricades within a few hundred metres of the U.N. Military Observer Group in India and Pakistan (UNMOGIP) office in Srinagar. 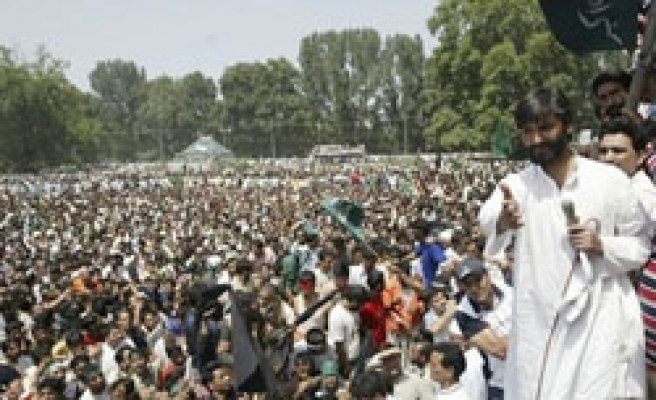 Tens of thousands of Muslims marched past the United Nations office in Indian Kashmir on Monday, protesting against New Delhi's rule in the disputed Himalayan region.

A row over land allocated to Hindu pilgrims visiting a shrine in Kashmir has snowballed into full scale anti-India protests, uniting Muslims and reviving calls for Kashmiri independence.

Indian police killed at least 22 Muslim demonstrators, including a senior Muslim leader, inflaming passions in one of the biggest Muslim protests since a revolt against Indian rule broke out in 1989 over Indian economic siege. More than 180 protesters were also wounded when police fired at them. Police closed a highway to Pakistan which the traders tried to use to ferry farm products they said were rotting because of the disruption of trade with the rest of India.

People in cars, buses, and motorcycles some of them carrying banners "Indian forces go back" streamed through Srinagar as troops kept their distance.

"This is a march for freedom, and God willing Indian occupation will end soon," Fayaz Ahmad Dar, a shopkeeper said.

The crisis began after the state government promised to give Kashmiri forest land to a Indian trust that runs Amarnath, a cave shrine visited by Hindu pilgrims. Many Muslims were enraged.

The government then rescinded its decision, which in turn angered Hindus in Jammu who attacked trucks carrying supplies to the Kashmir valley and often blocked the region's highway, the only surface link with the rest of India.

Kashmiri Muslims took to the streets to protest over economic blockade.