A Washington-based think tank is reported to have had participants at a closed-door meeting, including Turkish military officials and civilian experts, discuss various crisis scenarios for Turkey in a brainstorming session. 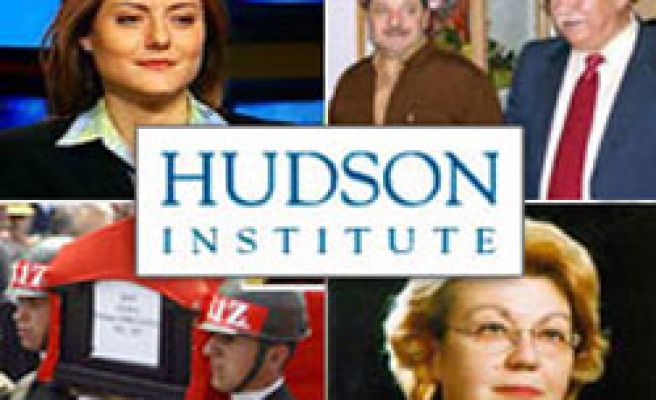 A Washington-based think tank is reported to have had participants at a closed-door meeting, including Turkish military officials and civilian experts, discuss various crisis scenarios for Turkey in a brainstorming session.

Assassi-nation of the recently retired chief of Turkey’s Constitutional Court, Tülay Tuğcu; a plot where 50 people would lose their lives in a terrorist act claimed by the outlawed Kurdistan Workers’ Party (PKK) in İstanbul’s Beyoğlu district; and a cross-border operation by the Turkish military into Iraq were among the possible scenarios discussed at the Hudson Institute, known for its anti-Islam discourse and neocon stance, both favored at the time of the US invasion of Iraq. Sources close to the think tank said that a significant number of the participants from the US objected to the scenarios floated during the session, asserting that they were too “unrealistic,” and refrained from making comments on the possibilities mentioned. About 20 participants attended the conference, which lasted a couple of hours, the same sources said.

At least one of the Turkish participants opposed a scenario in which terrorist leaders in northern Iraq were captured by US authorities and handed over to Turkish authorities, according to sources. This opposition was based on the reasoning that such a move would be perceived as US support for the ruling Justice and Development Party (AK Party) ahead of the general elections on July 22. The suggestion that the AK Party would benefit if the US supported Turkey in its war against northern Iraq-based terrorism is not new in Washington. In a report written last month by Soner Çağatay and Yüksel Sezgin, associates of the Washington Institute, the authors argued: “Can the AK Party sustain its latest strategy? Assuming that its apparent tactic of political polarization works, other variables could have an impact on the party’s public support. For instance, terrorist attacks by the PKK would hurt the AK Party significantly. Alternatively, the party’s popularity would be boosted if the United States pressured Iraqi Kurds to extradite into Turkish custody those PKK leaders currently based in northern Iraq.” US Deputy Assistant Secretary of State Matt Bryza said the scenarios being spoken of in the Hudson Institute were “insane,” according to a Turkish translation of his remark. Bryza also said that the US had no concern about the outcome of the general elections in Turkey, as long as the government is democratically elected. He added that Turkey’s democratic structure was most important for Turkey.

A group of AK Party deputies visiting Washington described the incident as “disgusting,” and said it would spell “treason” if Turkish participants really argued that PKK leaders should not be handed over to Turkey due to domestic political reasons.

Officials at the Turkish Embassy in Washington said they had heard that a meeting would be held at the Hudson Institute, but they had not been invited. No Turkish diplomat participated in the meeting, the same officials underlined.

Brig. Gen. Süha Tanyeri, director of the General Staff’s Strategic Research and Study Center (SAREM), Brig. Gen. Bertan Nogaylaroğlu, Turkey’s defense attaché in Washington, and Zeyno Baran, director of the Center for Eurasian Policy and senior fellow at the Hudson Institute, are rumored to have been among the meeting’s participants.

The scenarios discussed at the Hudson Institute dominated a press conference held on Thursday at the Turkish Embassy by AK Party deputies, led by İstanbul deputy Egemen Bağış, who is also a senior advisor to Prime Minister Recep Tayyip Erdoğan.

Saying that a brainstorming exercise based on the question “What will happen in Turkey if the head of Turkey’s Constitutional Court is assassinated?” had been held during a closed-door meeting at a US think tank, journalist Hasan Mesut Hazar asked Bağış as well as two other AK Party deputies, Reha Denemeç and Mevlüt Çavuşoğlu, about their reactions.

“I condemn all kinds of efforts that accept killing of any Turkish citizen, be it a senior judge or not, as the starting point or as part of a scenario. These are really shameful. I also condemn those who attempt to do such a thing in a country that alleges to be a democracy,” Bağış said.

Journalist Yasemin Çongar said “certain experts and officials argued at the meeting that the capture of PKK leaders by the US at this stage and their being handed over to Turkey would be unfavorable for political reasons,” and asked the deputies visiting Washington for their reaction.

“I find it disgusting that those persons who are from those lands assume an approach, saying, ‘Let’s wait for a while, let losses of people continue for a while’, just because of their political expectations concerning Turkey, while our commanders, conscripts and civilians are losing their lives. I harshly condemn it. These are approaches beyond politics that are equal to treason,” Bağış said.

“If there are certain persons who favor increasing the number of soldiers being martyred by the PKK because they believe that this will have an impact on the political life in Turkey, I say that they are traitors,” he added.

When journalist Yılmaz Polat asked whether the said discussion was the one held at the Hudson Institute, and hence organized by Zeyno Baran, Bağış said, “I don’t know that.” Facing insistent questions from journalists, Bağış, Denemeç and Çavuşoğlu said they didn’t have any information regarding those behind the controversial remarks and whether there were Turkish officials at the meeting. “I say that it is disgusting if the allegations are true,” Bağış said.

Meanwhile the hypothetical scenarios were described as being simply “too stupid” to have any credibility, by the former co-chair of the joint Turkish-EU Parliamentary Commission, Bülent Akarcalı. “These are simply too stupid to be credible. The US government has always been close to independent think tanks. So even if this is not an organization that is part of the US State Department, the US government should make a statement. In addition it is also important to know how much of these comments are adopted by the US administration. I believe the Turkish representatives that attended the meeting must have been there to prevent any mistakes that might have been made.”

Republican People’s Party (CHP) deputy Şükrü Elekdağ, a retired ambassador, referred to the Hudson Institute as a “serious institution,” but continued, “This is absurd.” Elekdağ, who served as ambassador to the US for 10 years added: “I don’t think serious people would take such scenarios seriously. They are trying to manipulate the country. It is a humiliating scenario.”

International relations Professor Hüseyin Bağcı of Ankara’s Middle East Technical University (ODTÜ) said he expected more scenarios on Turkey with sources in the US. Expressing concern that the Middle East could be restructured, Bağcı said: “I think intervention in northern Iraq would be wrong. That would create enormous problems for Turkey.”

They could be taking Turkey’s pulse

However the scenarios were not uniformly condemned as outrageous. Retired Ambassador İnal Batu said the Hudson Institute has a habit of “acting” out similar scenarios, even world wars. “It is very scary when it is very close to us. I don’t see anything strange. It would have been very different of course had this been a state institution,” he said, adding: “This is quite fashionable in the US. We have war games too. Senior officers attend such classes.” Batu also said that if the meeting had involved military officials from NATO countries then the participation of Turkish military officials was only natural.

Although he stated that acting out scenarios was not strange, Batu noted that if the claim that a Turkish representative indeed opposed handing over PKK terrorists to Turkish authorities by US forces in Iraq, “That would hurt us.” He added that speaking about something like this with foreigners would be “very wrong.”

Oya Akgönenç, Felicity Party (SP) representative responsible for foreign relations, said that in her opinion the content of the talks leaked to the press had the intention of taking Turkey’s pulse. “They will come to a conclusion and make some analysis. Leaking this story is perhaps a preparation, a way to determine an attitude,” she suggested.

Retired Ambassador Nüzhet Kandemir said US-based think tanks always worked on a number of scenarios. However he said that such scenarios never came under the spotlight during his time as Turkish ambassador to the US because he never allowed such a thing to happen. He also said Turkey would never let any of the Hudson scenarios become reality.