The guilty verdict against Yongyut paves the way for the Election Commission to investigate whether the party was involved in the vote buying in the December poll. 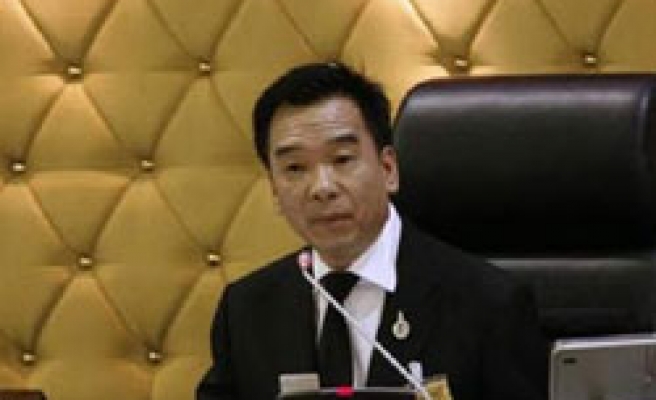 A top leader of Thailand's People Power Party (PPP) was found guilty of vote buying and banned from politics for 5 years on Tuesday, a ruling that could lead to the dissolution of the main party in the coalition government.

"There was enough evidence to believe that (Yongyut) had violated the 2007 election law," said a judge who read out a verdict broadcast on national television.

The PPP appeared to be in disarray after the ruling.

Gan Thiengaew, another deputy leader, said he would urge Samak to dissolve parliament and hold fresh elections, but the party's chief spokesman rejected the idea.

"It is not necessary. What are we running away from? Can a house dissolution help us escape a party dissolution," PPP spokesman Kuthep Saikrachang said.

Thailand's main stock index closed down 1.1 percent on Tuesday before the verdict.

The index is down more than 17 percent since a street campaign against the PPP-led government began on May 25, accusing it of being a Thaksin proxy.

The court ruling came on the same day the Supreme Court opened the first graft trial against former Prime Minister Thaksin Shinawatra, nearly two years after he was ousted in a bloodless 2006 coup.

Thaksin, who did not appear in court, is accused of using his position as prime minister to influence the sale of a prime piece of Bangkok land by a state agency to his wife.

The former telecoms billionaire, who returned to Thailand in February to defend himself, has denied the charges.

The trial is among several court cases coming to a head in July as Thaksin's supporters and his opponents in the military and royalist establishment struggle for control of Thailand's future, analysts say.

The guilty verdict against Yongyut paves the way for the Election Commission to investigate whether the party was involved in the vote buying in the December poll.

The EC could then pass its findings to the Constitutional Court, which could disband the PPP as happened to Thaksin's former Thai Rak Thai party (Thais Love Thais) after the coup.

"Should the verdict go against Mr. Yongyut today, the PPP, its senior members and the government will all be at risk," the Bangkok Post newspaper said in an editorial.

However, it could be several months before the Constitutional Court ruled on the dissolution of the PPP, which won the most seats in the election on an avowedly pro-Thaksin ticket.

The EC had accused Yongyut of mobilising village chiefs to buy votes in the poll, but he denied any wrongdoing.

Yongyut did not comment after the ruling, but he has said the case against him was part of a "systematic political attempt to sabotage the People Power Party".

Leaders of the People's Alliance for Democracy (PAD), whose 2005 street campaign eventually led to the coup against Thaksin, vowed on Monday to continue their protests to force the Samak government from power.

The coalition of academics, royalists and businessmen abandoned their siege of Samak's headquarters on Monday after a court imposed restrictions on the rally, which moved to nearby streets in the Thai capital.

Samak survived a no-confidence motion last month, as expected, after three days of fiery debate that questioned his handling of the economy at a time of soaring inflation and stuttering growth.