Thousands of people marched to and rallied in front of the Army headquarters in central Bangkok, which houses the Council for National Security (CNS) led by Thai Army chief Sonthi Boonyaratkalin, to demand the military junta step down. 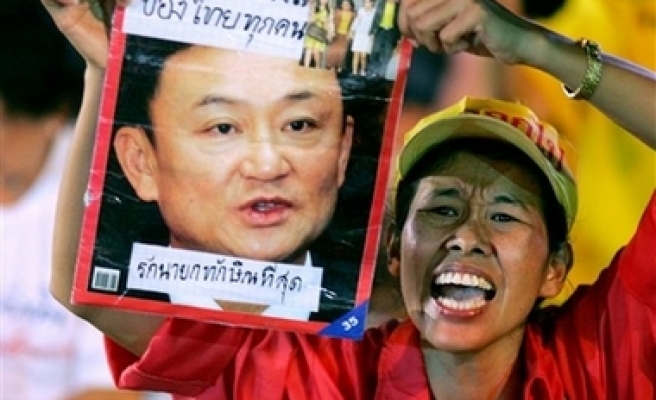 Thousands of people marched to and rallied in front of the Army headquarters in central Bangkok, which houses the Council for National Security (CNS) led by Thai Army chief Sonthi Boonyaratkalin, to demand the military junta step down.

Nearly 10,000 demonstrators began their rally at Sanam Luang, or the Royal Field square in central Bangkok at about 4 p.m.(0900 GMT) Saturday, and started to move towards the Army headquarters about six kilometers away after 9 p.m.(1400 GMT).

Some 2,000 policemen were dispatched around Sanam Luang and the Army headquarters to monitor and control any possible disturbance, according to Metropolitan Police chief Lt-General Adisorn Nonsee.

Anti-riot policemen, equipped with helmets and shields but without guns, were deployed at the scene.

The Army Headquarters was heavily guarded by soldiers behind the gate.

The main organizer of the demonstration was People's Television (PTV), a satellite TV station which was set up by some former members of the now-disbanded Thai Rak Thai (TRT) party after the CNS, then named Council for Democratic Reform (CDR), toppled the administration of Thaksin Shinawatra, then Thai prime minister and TRT leader, in a military coup d'etat on Sept. 19 last year.

The PTV mouthpieces, at a stage set up in front of the CNS headquarters, told thousands of audience that "no dictatorship could last or suppress democracy for long," and repeated calls that the CNS should step down.

Many PTV followers were wearing yellow headbands bearing the Thai words "Get out, GNS," while some of the demonstrators were holding banners and chanting pro-Thaksin, anti-junta slogans.

CNS chairman Sonthi, who also serves as Army Commander-in-Chief, was previously quoted by the local press as saying that he was confident that the security authorities would be able to control the situation.

Meanwhile, the army chief, who was in northern province of Chiang Mai Saturday, has warned former TRT leaders not to stir up trouble.

The participants also included some former TRT MPs from the north and northeastern provinces, regarded as strongholds of the TRT party, according to earlier reports.

The Metropolitan Police earlier estimated that up to 9,000 protesters from the provinces might join the rally in the capital.

A few other groups also joined the rally, which according to organizers would continue overnight until Sunday morning. They threatened to go on with the protests if the CNS would not stand up to respond to their demands.

The Tribunal ruling found some TRT senior members guilty of electoral fraud in the lead-up to the April 2, 2006 general election, which was nullified later. The Tribunal also banned 111 senior executives of the party, including Thaksin, from all political activities, including electoral process, for the next five years. Last Mod: 10 Haziran 2007, 10:15
Add Comment