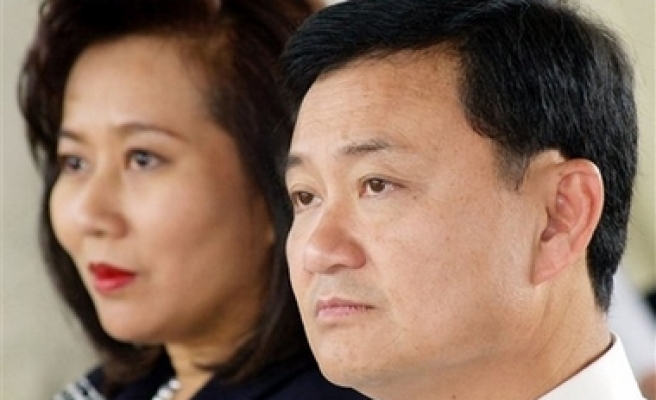 The charges against Thaksin and his wife Pojaman centre on a controversial land purchase in 2003.

They were each charged with three violations of anti-corruption laws on accusations that Thaksin illegally influenced the deal to allow Pojaman to buy the land from a government agency at a bargain price.

"Prosecutors have filed a case against Thaksin, who is the first defendant, and Pojaman as the second defendant," prosecutor Nanthasak Poonsuk told reporters.

Prosecutors read the charges before the Supreme Court, where a special panel of judges tasked with hearing political crimes will consider them.

The judges said they would decide on July 10 whether to accept the case.

If it goes ahead, prosecutors would be required to present Thaksin and his wife in person during the opening arguments.

Thaksin has been in exile since he was ousted last year, while his wife was hospitalised in Singapore earlier this week. If the Shinawatras fail to appear, the court could throw out the case.

At the end of the trial, neither side would be able to appeal the verdict.

Convictions on all three charges could land both Thaksin and Pojaman in prison for up to 13 years and they could each face a fine of up to 200,000 baht (6,250 US).

Prosecutors are also seeking to have the five-hectare (13-acre) plot of land confiscated.

Pojaman bought the plot in Bangkok for the relatively cheap price of 772 million baht (24.1 million US) in 2003 from the Bank of Thailand's Financial Institution Development Fund.

The land's value had earlier been estimated at 2.1 billion baht, according to the attorney general.

Investigators allege the transaction was illegal because as the head of government Thaksin oversaw the fund and its finances, thus making the sale a conflict of interest.

Although this is the first criminal case filed against Thaksin, his wife is already fighting a court battle over tax evasion charges.

In the past month, military-installed authorities have disbanded Thaksin's party, banned him from political office and frozen more than 1.5 billion dollars of his family's assets.

The actions against Thaksin sparked daily protests by thousands of his supporters, who have taken to the streets every night this month to call for the junta to step down.

The government said Wednesday it would hold general elections earlier than expected, in what analysts said was an effort to prevent Thaksin's party from having enough time to regroup. Last Mod: 21 Haziran 2007, 15:14
Add Comment