Thai authorities burnt down illicit drugs worth some 3.6 billion baht (106 million U.S. dollars) on Tuesday to mark the International Day against Drug Abuse and Illicit Trafficking. 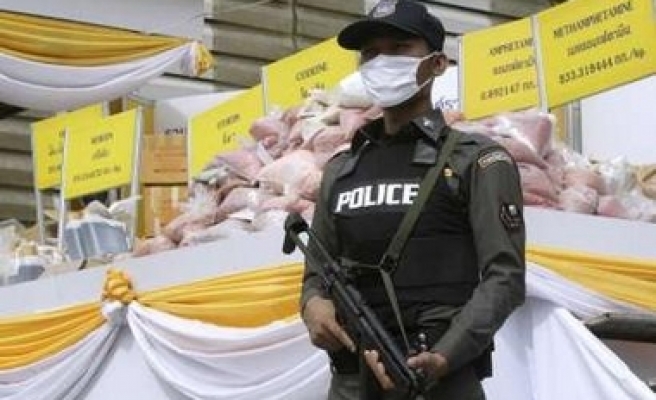 Thai authorities burnt down illicit drugs worth some 3.6 billion baht (106 million U.S. dollars) on Tuesday to mark the International Day against Drug Abuse and Illicit Trafficking.

It is the 35th time that Thai authorities burn down illicit drugs seized from drug traffickers. On Tuesday, about 2.9 tons of illicit drugs from 12,672 drug cases during the past year were destroyed through pyrolytic incineration.

Morakot Kornkasem, the deputy public health minister, said that during the 2,924 kilograms of confiscated narcotic drugs, amounting up to 3.6 billion baht, Amphetamine continued to be the first in the rank.

Morakot stated that Thailand has continuously devoted much energy and efforts to solving the widespread of drugs and to alleviating the effects of drug taking. Moreover, great emphasis was placed on the tight control of precursors, rehabilitation and addictive treatment to cure patients with an effort to help patients return to the society.

The deputy minister said that during last October to March this year, there were altogether 28,137 patients who undergone the rehabilitation program, of which 5,266 were in voluntary system, 15,475 were in compulsory system and 7,367 were in correctional system.

However, Morakot admitted the patients' habits have changed in a more health damaging direction. In 2005, "single drug use" accounted for 85 percent of total drug usage and declined to 80 percent. In contrary, "poly substitution" surged from 6 percent in 2005 to 14 percent in 2007. By using multiple drugs, they act as stimulus causing greater and faster damages to the nervous system and the brain than single drug usage. Last Mod: 26 Haziran 2007, 16:00
Add Comment