The bus in which Lebanese civil war began 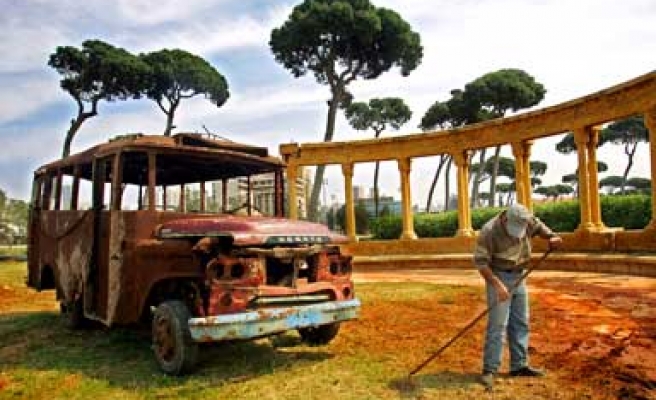 Lebanon will not be driven back to civil war. That is the solemn oath taken by activists displaying for the first time the rusty bus on which a 1975 massacre sparked the country's 15-year strife.

The bus, an oxidised shell, will be on display on Friday for the 32nd anniversary of the war's outbreak at a critical time when many fear that deeply divided Lebanon may plunge back into violence.

"This is the outcome of civil wars," said Sami Hamdan, owner of the old Dodge bus as he knocked on the reddish brown metal of the decaying vehicle.

"People get killed, everyone loses and everything gets destroyed. All that's left will be a rusty carcass," the 61-year-old said.

Lebanon erupted into bloodshed on April 13, 1975, when Christian militiamen machinegunned the bus carrying Palestinians in Beirut's eastern suburb of Ain al-Rummaneh, hours after the killing of a Christian outside a nearby church.

Twenty-seven passengers on board were killed and the civil war began.

For the Lebanese, the conflict remains a stark memory of national and personal loss during which fighting punctuated by savage massacres left more than 150,000 people dead and even more maimed, uprooted or forced to emigrate.

Since 1975, a black and white photograph of the bullet-riddled Ain al-Rummaneh bus has been the haunting image of the outbreak of the war, although the vehicle itself was never put on public display.

The wrecked bus, completely empty bar a mangled back seat, now stands idle in the central field of Beirut racetrack which was once along the Green Line separating Beirut's Christian east and its Muslim western sector.

The racetrack is adjacent to the Beirut National Museum which was the main crossing point in the once-divided capital, where militias ruled the streets with killings, kidnappings and extortions.

Under the slogan of "Remember it, don't repeat it," Friday's April 13 remembrance activities include conferences and exhibitions of wartime pictures, films, documents, songs, newspapers and news bulletins.

"Former militiamen will also speak to the public about their experiences during the war," organiser Ibrahim Eid said.

"White sheets will be posted near the bus for the public to express freely their feelings about the civil war," he added.

"We want to say that the Lebanese will not allow another civil war to break out, and we want to warn new generations of the atrocity and absurdity of wars," Hamdan said, adding that the organisers asked him to bring the bus to the capital so it could be put on show for the anniversary.

"The Ain al-Rummaneh bus was parked in a village in southern Lebanon, so I had to put new tyres on it in order to tow it to Beirut," said Hamdan, who drives a school bus for a living.

He bought the bus 25 years ago from its original owner, Abu Rida, who was behind the wheel when it was attacked on that fateful April day.

Abu Rida was slightly wounded during the attack, but his life was saved when he ducked down and hid under the bodies of the victims. He later repaired the vehicle and drove it again briefly before selling it to Hamdan.

"I bought his bus because it was notorious. I also wanted a new bus because my own had been hit by a shell that killed three children and wounded 17 others," Hamdan said.

"I am a living martyr of Lebanon's wars -- that's why I want to warn people not to do it again. I have been wounded and kidnapped. In the Israeli attack last year the whole building where I lived was destroyed," he said.

"In January, my bus was destroyed and transformed into a barricade" during street battles between the government and opposition militants which took a confessional turn and sparked fears of a return to civil strife.

"I am a Shiite, but I respect all religions. I am against confessionalism amd I hate all our leaders and politicians because they are all liars," he said.

"I want to put all our leaders on a bus and drive them to a remote place where they treat disabled people because they all need therapy," Hamdan said. "They are sick. They constantly seek blood, violence and money."