The left's unity efforts may go up in smoke

The merger talks between the Republican People's Party (CHP) and the Democratic Left Party (DSP), which began partly under the influence of calls at recent republican rallies for unity in the left, are already near the saturation point with unresolved pro 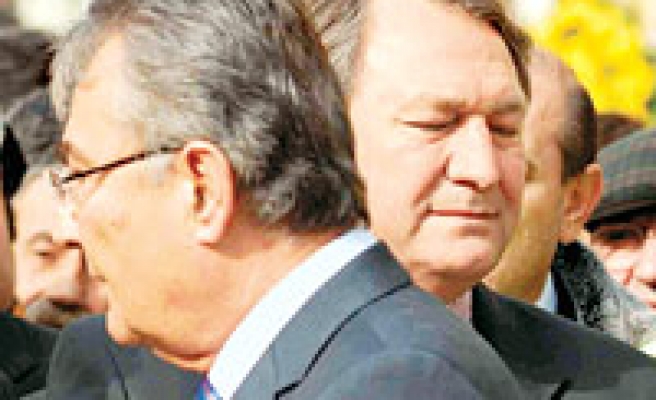 The merger talks between the Republican People's Party (CHP) and the Democratic Left Party (DSP), which began partly under the influence of calls at recent republican rallies for unity in the left, are already near the saturation point with unresolved problems.

CHP leader Deniz Baykal and DSP leader Zeki Sezer did not meet at the latest rally, held in İzmir on Sunday, disappointing the crowds who had expected them to give a strong message of unity there.

With mutual accusations between the two parties slowly replacing the statements promising unity, observers say the marriage of the left may soon need more than counseling. But the process is likely to go on, with no party willing to risk its public image by calling off the talks.

While two party leaders were expected to meet in the republican rally held in İzmir, the DSP organized a rally in Amasya, during which Sezer spoke critically of the CHP and participants at the gathering shouted "Baykal, resign." Pointing to the crowd Sezer said, "If they ignore these crowds and expect us to unite, then we will tell them goodbye." Speaking to NTV yesterday, Baykal said he held Sezer responsible for the slogans shouted during the rally. "We do not ignore those crowds, but they have done no good to a cooperation between the CHP and the DSP. ‘Baykal, resign' slogans are not good. Mr. Sezer does not embrace the cooperation bid. These attitudes are not good."

The talks between the CHP and the DSP started with bargaining over how many DSP deputies will take places on the CHP's candidate lists. In line with intra-party politics the DSP initially proposed that the CHP should allocate them a quota of 50 deputies. The CHP rejected this proposal, arguing that a quota of 50 deputies would imply securing 10 percent of the national vote, which the DSP is not expected to manage. Although the DSP stated that a comparison with the 2002 elections would be misleading, as polls show a significant increase in support for the DSP, it lowered its quota to 35 deputies, suggesting it does not expect to pass the election threshold. However this offer too was declined by the CHP.

In the face of claims that Rahşan Ecevit, the founding chairwoman of the DSP and wife of the late Turkish statesman Bülent Ecevit, was against the merger, the CHP management inquired what she was thinking about the union. As Rahşan Ecevit approved the merger of the two parties, the CHP wanted her to declare her intention. Thus she issued a written statement last week in which she stated she was supporting the unity of both parties -- and further parties. Following this statement talks resumed. However the CHP further decreased the quota it would allocate to DSP deputies to just 20 or 25.

During the talks conducted by CHP deputy chairmen Eşref Erdem and Mehmet Sevigen, and DSP Secretary General Ahmet Tan and Deputy Chairman Emrehan Halıcı, the CHP submitted a list of 25 candidacy positions allocated to the DSP. Thus the CHP proposed allocating them places as follows: nine for İstanbul, four for Ankara, four for İzmir, and one each for Antalya, Adana, Zonguldak, Eskişehir, Bursa, Edirne and Kırklareli.The CHP also told the DSP: “Give us a list of 25 deputy candidates. We will place them [high] in the ranks on the party lists to guarantee their election. We will do what is best.”

On the other hand senior DSP executives underscored that it was important for them to know which DSP deputy candidates would be placed at which rank in the CHP’s party lists, and they demanded that this be fixed in writing. This request from the DSP added to the feeling that the DSP did not have trust in the CHP. The CHP representatives underlined that it was wrong to have post-election plans in this well-intentioned cooperation: “Your intention is to leave the CHP immediately after the elections. This is not a good approach. If you continue to behave in this way, this cooperation will not receive the popular support it deserves.” The senior CHP executives also sought guarantee from the DSP that 25 DSP deputies would lend unconditional support to the CHP in the event of the taking of power by the CHP following the elections.

The fact that the CHP would nominate DSP candidates only from 11 provinces was a disappointment for many DSP members aspiring to enter Parliament. The DSP management could not decide whether 25 deputy candidates should be former DSP deputies known to be loyal to the party or new names. While the people who have not previously served as deputies argued that their time has come, the former deputies claimed that sending experienced party members to Parliament would give a strong message for the next elections. This disagreement served as another pothole on the road to cooperation.

Reportedly, following the DSP Amasya rally, the CHP further resized the DSP’s quota to 12-15 deputies. Baykal’s reply to the Youth Party’s (GP) offer for a pre-election cooperation was that their priority was to ensure cooperation with the DSP and that they might negotiate with the GP if that cooperation were to be ensured. Following this reply GP Deputy Chairman Emin Şirin reportedly paid a visit to Rahşan Ecevit and sought her support. If the DSP and CHP marriage takes place, the GP may join them. Moreover the DSP proposed including the Social Democratic People’s Party (SHP) and the December 10 Movement, a platform of smaller parties and some nongovernmental organizations, in the alliance. In the face of this offer the CHP told the DSP to bargain only in terms of its own name.

Baykal: DSP has a problem that goes beyond Sezer

Speaking to NTV on Sunday Baykal noted that his party was ready to cooperate on the terms previously agreed with the DSP executives. Baykal further added: “We did not expect that unity would take such a long time. We thought we could have obtained positive results sooner. We set our own considerations aside and developed a new concept in accordance with the DSP’s needs. They told us they had no expectations then. There was an agreement. Now it appears that there is an ongoing debate within the DSP. We want a concrete outcome. I would like to make it clear that I want this unity more than anybody else.”

With regard to the reluctance of both party leaders to show up together and united at the anti-government rally in İzmir, Baykal said: “It had nothing to do with me. I still hold my supportive and constructive approach. ... And I still have hopes of unity. We are ready to cooperate within the terms we agreed on. I think the DSP has a problem which goes beyond [its leader] Sezer.” Recalling that he has held meetings with figures from the mainstream right, Baykal implied a joint action with these figures in the upcoming general elections.