The poems of Guantanamo speak on behalf of them

Gitmo detainees who have been illegally held under various torture techniques without charge or giving court rights for years, tried to reflect what happened inside on Poems from Guantanamo: the Detainees Speak, to be published later this year. 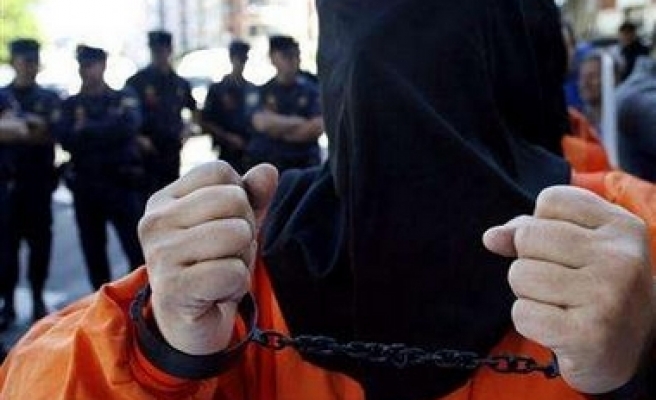 The words of the celebrated Pakistani poet were scratched on the sides of a Styrofoam cup with a pebble. Then, under the eyes of Guantanamo Bay's prison guards, they were secretly passed from cell to cell. When the guards discovered what was going on, they smashed the containers and threw them away, fearing that it was a way of passing coded messages.

Fragments of these "cup poems" survived, however, and are included in an 84-page anthology entitled Poems from Guantanamo: the Detainees Speak, to be published later this year by the University of Iowa Press.

The verses provide a harrowing insight into the torments and fading hopes of the prisoners. Only two Guantanamo inmates have been charged with a crime.

They were brought to light by Marc Falkoff, a US professor of law with a doctorate in American literature. He represents 17 Yemeni inmates and has made 10 visits to Guantanamo. He dedicates the book to "my friends inside the wire".

In the summer of 2005 Professor Falkoff was sent two poems from his clients. Written in Arabic, they were included in letters they could legally send. Because all communication with the detainees is deemed a potential threat to national security, everything - letters, interview notes, legal documents - must be sealed and sent to a US intelligence facility for review. The two poems were deemed a potential risk and remain classified to this day.

Professor Falkoff contacted other lawyers and discovered that several had received poems from their clients. Other detainees, like the two released Britons, Moazzam Begg and Martin Mubanga, wrote poetry while in prison and brought them with them on their release.

Censorship remains absolute at the camp however. As far as the US military is concerned: "poetry ... presents a special risk, and DoD [Department of Defence] standards are not to approve the release of any poetry in its original form or language". The fear, officers say, is that allegorical imagery in poetry may be used to convey coded messages to "militants" outside.

That is scoffed at by Professor Falkoff. "These are the same military censors who in 2004 tried to stop me receiving allegations of abusive treatment of my clients who were being subjected to intense heat and cold and forced to remain standing." He added: "If the inmates were writing words like 'the Eagle flies at dawn,' the censors might have a case, but they are not. I fully accept their right to stop any coded messages to outside. But what the military fears is not so much the possibility of secret messages being communicated, but the power of words to make people outside realise that these are human beings who have not had their day in court."

The thoughts of the inmates are considered so potentially dangerous by the US military that they are not even trusted with pen and paper. The only exception is an occasional 10-minute period when they are allowed to write to their families via the International Red Cross. Even then the words they write are heavily censored.

The 380 or so inmates of Guantanamo include some al-Qa'ida fighters. But the majority are there because they were swept up by the police and intelligence services of other countries working on behalf of the US. In their despair many of these detainees have turned to verse to express their innermost feelings.

Others have attempted or committed suicide. One of the poets is a Bahraini man who has been held in solitary confinement since the end of 2003. He has tried to kill himself 12 times while in the prison. On one occasion, he was found by his lawyer, hanging by his neck and bleeding from a gash to his arm.

There are other tragic tales behind the verses. The "cup poems" of Guantanamo speak of the strange absence of flowers in spring, the bangles worn by young women and handcuffs on the militants.

Fragments survived in the memory of the poet Shaikh Abdurraheem Muslim Dost after his eventual release, but thousands of lines of poetry he wrote in prison have disappeared.

Dost, a respected religious scholar, poet, and journalist - and author of nearly 20 books - until his arrest in 2001, spent nearly three years in Guantanamo with his brother. Sent home two years ago, the brothers were picked up by Pakistani intelligence and they too disappeared. Nothing has been heard of them since.

Aami al Haj, a Sudanese national, was a journalist covering the war in Afghanistan for al-Jazeera television, when, in 2001, he was arrested stripped of his passport and press card and handed over to US forces. He was tortured at both Bagram air base and Kandahar before being transferred to Guantanamo Bay. The US military says he was a financial courier for Chechen rebels and that he assisted al-Qa'ida but has offered no evidence to support the claims.

"When I heard pigeons cooing in the trees, Hot tears covered my face," he wrote from his prison cell. "They have monuments to liberty And freedom of opinion, which is well and good. But I explained to them, that Architecture is not justice."

Humiliated In The Shackles

When I heard pigeons cooing in the trees,

When the lark chirped, my thoughts composed

A message for my son.

Mohammad, I am afflicted.

In my despair, I have no one but Allah for comfort.

The oppressors are playing with me,

As they move freely around the world.

They ask me to spy on my countrymen,

Claiming it would be a good deed.

They offer me money and land,

And freedom to go where I please.

But their gift is an empty snake,

They have monuments to liberty

And freedom of opinion, which is well and good.

But I explained to them that

Architecture is not justice.

America, you ride on the backs of orphans,

And terrorize them daily.

The world recognizes an arrogant liar.

To Allah I direct my grievance and my tears.

I am homesick and oppressed.

Mohammad, do not forget me.

Support the cause of your father, a God-fearing man.

I was humiliated in the shackles.

After the shackles and the nights and the suffering and the tears,

How can I write poetry?

My soul is like a roiling sea, stirred by anguish,

I am a captive, but the crimes are my captors'.

I am overwhelmed with apprehension.

Lord, unite me with my son Mohammad.

Lord, grant success to the righteous.

An Al-Jazeera cameraman, Sami al Hajj, a Sudanese, was visiting his brother in Damascus after the 11 September attacks when he got a call asking him to go to Pakistan to cover the impending war in Afghanistan. Instead, he ended up in Guantanamo where he claims he has been severely and regularly beaten, scarring his face.

Take my death shroud and

The remnants of my body.

Take photographs of my corpse at the grave, lonely.

Send them to the world,

To the judges and

To the people of conscience,

Send them to the principled men and the fair-minded.

And let them bear the guilty burden, before the world,

Of this innocent soul.

Let them bear the burden, before their children and before history,

Of this wasted, sinless soul,

Of this soul which has suffered at the hands of the "protectors of peace".

Arrested in Pakistan and held in solitary confinement since 2003, Jumah al Dossari's mental wellbeing is worrying his lawyers. The 33-year old Bahraini national has tried to kill himself 12 times since his incarceration in Guantanamo. On one visit, his lawyer found him hanging in a bedsheet noose, with a deep gash in one wrist. In a letter Mr Dossari wrote in 2005, he said: "The purpose of Guantanamo is to destroy people and I have been destroyed."

Is it true that the grass grows again after rain?

Is it true that the flowers will rise up again in the Spring?

Is it true that birds will migrate home again?

Is it true that the salmon swim back up their streams?

But is it true that one day we'll leave Guantanamo Bay?

Is it true that one day we'll go back to our homes?

I sail in my dreams. I am dreaming of home.

To be with my children, each one part of me;

To be with my wife and the ones that I love;

To be with my parents, my world's tenderest hearts.

I dream to be home, to be free from this cage.

We are innocent, here, we've committed no crime.

Set me free, set us free, if anywhere still

Justice and compassion remain in this world!

Shortly after 11 September, Osama Abu Kadir travelled to Pakistan to perform charity work in Afghanistan with the Islamic missionary group Tablighi Jamat. The US claims Tablighi was providing fighters for jihad in Afghanistan and arrested Mr Kadir near Jalalabad in November 2001. In his native Jordan, he was known as a dedicated family man who worked as a truck driver. In Guantanamo, he is known as prisoner number 651.