They have no regrets about Iraq

Allies President Bush and Tony Blair strongly defended their decision to go to war in Iraq and to remain there, despite rising opposition in both the US and Britain and their own plunging approval ratings. 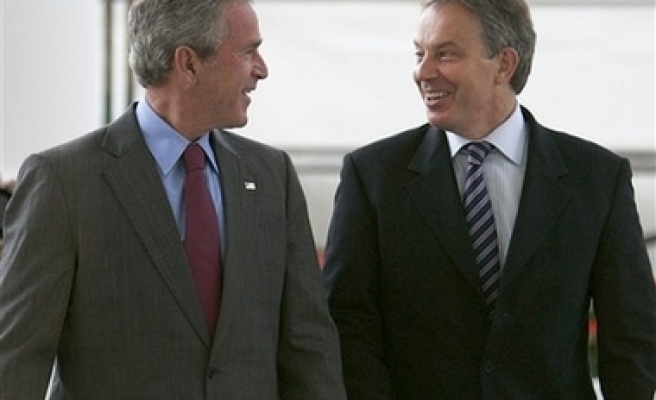 Allies President Bush and Tony Blair on Thursday strongly defended their decision to go to war in Iraq and to remain there, despite rising opposition in both the United States and Britain and their own plunging approval ratings.

"This is a fight we cannot afford to lose," Blair said.

Standing side by side in the Rose Garden, the two leaders said they had no regrets about the decision, contending Iraq has become the main battleground in the war against "global terrorism".

Said the outgoing British prime minister: "The forces that we are fighting in Iraq — al-Qaida on the one hand, Iranian-backed elements on the other — are the same forces we're fighting everywhere."

Bush said he's optimistic a compromise will be reached with Congress on an Iraq spending bill. "I think we'll get a deal. We'll work through something we can all live with," Bush said.

The president took the prime minister to the Situation Room in the basement of the White House for the hour-long briefing from Gen. David Petraeus, the top U.S. commander in Iraq, U.S. Ambassador Ryan Crocker, and their British counterparts.

Blair, stepping down as prime minister on June 27, spent the night at the White House, a mark of the special relationship he has with Bush. Many believe that friendship tarnished the legacy of the once-popular British leader. Blair stayed in the Queen's Bedroom, used by Winston Churchill during the former British leader's frequent World War II-era visits to Washington.

Blair predicted that Britain would continue to stand side by side with the United States after he leaves office. "I believe that we will remain a staunch and steadfast ally in the fight," he said.

Blair, once enormously popular in his country, saw his popularity tumble largely over his alliance with Bush on Iraq.

The president praised Blair, calling him extremely effective as a leader and "dogged" when he gets on a subject. "I appreciate the fact that he can see beyond the horizon. And that's the kind of leadership the world needs," Bush said.

Asked by a British reporter if Blair was the right person for Bush to be dealing with now, given that he will leave office on June 27, Bush said absolutely. He admonished the reporter for "trying to do a tap dance on this political grave" and said, "You don't understand how effective Blair is."

Blair said he was proud to stand shoulder to shoulder beside Bush since the Sept. 11, 2001, terror attacks: "I admire him as a president and I regard him as a friend."

Bush voiced optimism that he could reach a deal with Congress on a stalled $124.2 billion spending bill to help pay for U.S. troops in Iraq and Afghanistan.

Blair, noting that he could hear anti-war demonstrators outside the White House, defended anew his decision to join the U.S. and go to war in Iraq.

Even if people disagree with remaining in Iraq until victorious, "at least people understand that there is a battle we are fighting around the world today. ... You don't win those battles by being a fair weather friend to your ally."

Bush, however, acknowledged that he really didn't know Brown well. "I hope to help him in office the way Tony Blair helped me," Bush said.

"Will I miss working with Tony Blair? You bet. Can I work with the next guy? Of course," Bush said.

Brown, if he becomes party leader, will face a difficult challenge from David Cameron, the popular young leader of a resurgent Conservative Party. Bush sidestepped a question about reports that Cameron does not want to be seen with him, instead saying his relationship with Blair had been "unbelievably productive."

"I don't regret things about what may or may not have happened over the past five years. I honor a relationship that I truly believe has been laying the foundation for peace," Bush said.