Thousands hit the streets to mark Indonesia May Day

Thousands of workers marched through the streets of several Indonesian cities on Thursday to mark International Labour Day, demanding higher wages and opposing the so-called outsourcing practices in the country. 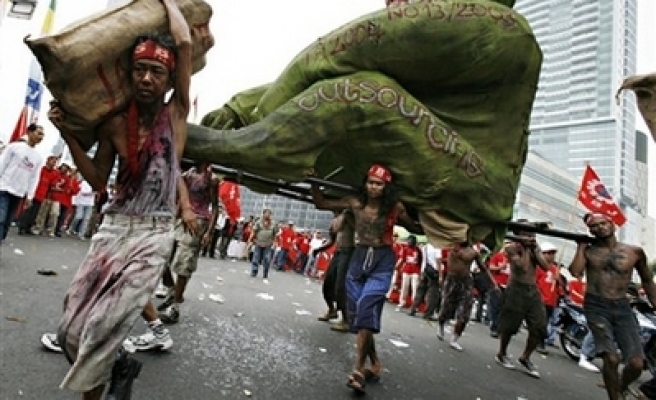 In the capital Jakarta, more than 15,000 police officers were deployed, backed by water cannons, to monitor thousands of protestors from a number of labour organizations marching through the city's streets, said Jakarta city police spokesman I Ketut Untung Yoga Ana.

Security forces were on heightened alert because of rioting and vandalism that broke out in Jakarta during Labour Day rallies two years ago.

Riot police equipped with shields and sticks and backed by trucks with mounted water cannons stood guard outside the presidential palace and the US embassy, which had barbed wire strung across its main gates, witnesses said.

Protest organizers said that around 40,000 workers from nearly two dozen labour organizations were to take part in the "May Day Fiesta," centered at the Bung Karno Sports Stadium in central Jakarta.

More than 3,000 demonstrators marching on the palace caused heavy traffic jams at Jakarta's main thoroughfares although May Day is a holiday.

Some 3,000 other workers staged a peaceful but noisy rally at a football field outside the Borobudur Intercontinental Hotel in central Jakarta, demanding better work conditions and lower prices on commodities. They also opposed outsourcing schemes and called for an end of cheap labour practices.

Labour activists say that employers are using outsourcing practices to avoid giving workers pensions or other funds and making them permanent employees.

The Indonesian government has also come under fire for its perceived failure to protect Indonesian workers abroad, although it has deflected some of the blame onto the migrants workers for using illegal means and unofficial agencies to get abroad.

In many cases, Indonesians workers have been severely exploited and some even murdered by their foreign employers.

Thousands of workers were also demonstrating in more than a dozen provincial capitals across Java, including Bandung, Semarang and Surabaya as well as in Makassar, capital of South Sulawesi province and Medan in North Sumatra.

There were no immediate reports of violence or other incidents from those rallies.