Thousands in Sudan protest US, EU against court move 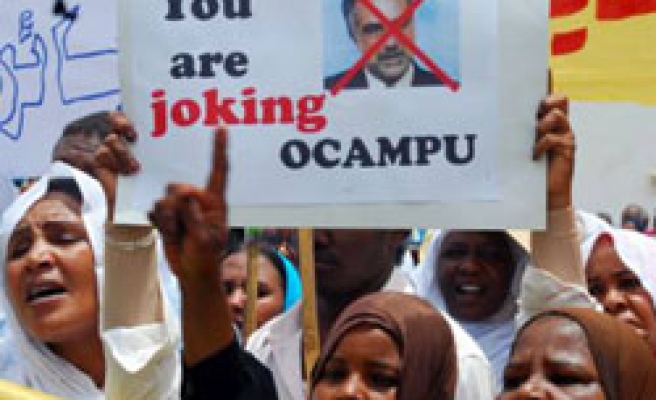 Thousands of protesters chanting "Down, Down USA!" rallied in Khartoum on Sunday after reports that the International Criminal Court (ICC) may seek the arrest of Sudan's president for alleged war crimes.

A senior European diplomat said on Friday the court's prosecutor was likely to seek the arrest of President Omar Hassan al-Bashir in a case he will open on Monday about war crimes the ICC claims were committed in Sudan's Darfur region.

"With our souls, with our blood we die for Bashir," the protesters chanted as they marched through the streets of Khartoum towards the offices of the United Nations.

Hundreds of people also gathered near the cabinet office where the government was holding an emergency meeting to discuss the issue.

Most of the protesters were government workers or from unions linked to Bashir's dominant National Congress Party (NCP). The demonstration was organised by the NCP's Sudanese Student Union and other government groups.

Awad Ahmed, 53, a worker from the agriculture ministry, said: "The Sudanese people are all rejecting this -- this is America targeting Sudan," he said. "We will not send Bashir. We would die first."

Sudan has said an ICC move against its top officials could undermine attempts to end the conflict in Darfur. Two senior government officials told Reuters Sudan would probably seek Chinese, Russian and African support at the United Nations to help block a warrant for Bashir.

The U.N. Security Council can pass a resolution suspending an ICC warrant or investigation for 12 months, which can be extended further. However, observers say once Bashir is named, a suspension would do little to improve Sudan's relations with the West.

Sudan's ambassador to the Arab League, Abdel Moneim Mabrouk, said he was confident the pan-Arab body, which will call an emergency meeting to discuss the crisis, would support Sudan.

"We are now mediating in all diplomatic channels to gain support ... and to stop this effort by the ICC which is an unprecedented move which will not only harm peace in Sudan but peace and stability in the whole region," he told Reuters.

The United Nations has heightened security in the capital, evacuating families of staff members, restricting movement and relocating non-essential staff from Darfur.