This week an alliance of conservatives and center-leftists disillusioned with Ortega's leadership organized the biggest protest he has faced since returning to power. 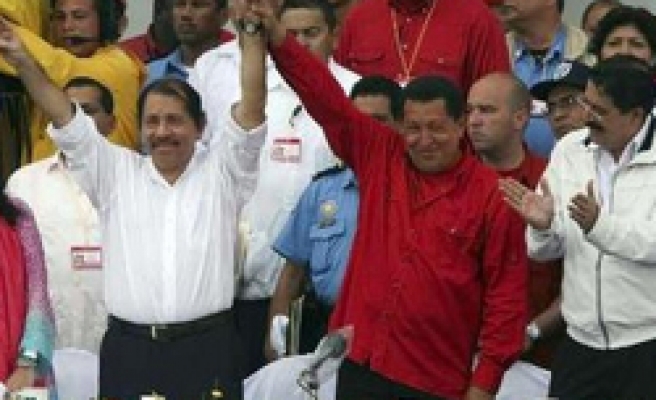 Tens of thousands of people filled Nicaragua's capital on Saturday to celebrate the country's 1979 leftist revolution, giving a lift to President Daniel Ortega as his government faces simmering protests.

Waving red and black flags and cheering under exploding fireworks, the crowd heard a barrage of speeches by the region's leftist leaders, including Venezuela's President Hugo Chavez.

Ortega, a former Marxist guerrilla and Cold War-era foe of the United States, was elected for a second stint in power in 2006.

But opposition groups have organized large marches against him in recent weeks for banning two small political parties from local elections and failing to keep down rising food and energy prices, hitting poverty stricken Nicaragua hard.

This week an alliance of conservatives and center-leftists disillusioned with Ortega's leadership organized the biggest protest he has faced since returning to power.

"The march staged against you recently was repeated 100 times in the media and overblown," said Chavez. "Here today are the people of Nicaragua, the people are united."

Ortega, who fought U.S.-backed Contra rebels in the 1980s after his Sandinista revolution ousted the Anastasio Somoza dictatorship, said his movement had passed through difficult moments before and triumphed.