The one-and-a-half hour march by Japanese and foreign activists, citizen groups and non-governmental organisations took place under heavy security ahead of the July 7-9 summit of the rich nations at the hot spring and lake resort of Toyako 70 km (45 miles 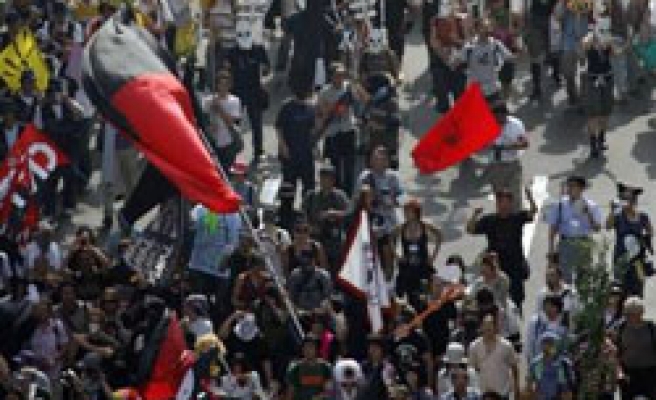 Several thousand people rallied on Saturday on the streets of central Sapporo, Japan, to protest against a Group of Eight summit due to start next week at a luxury hotel a two-hour drive away.

Four Japanese men were arrested, said a police official on the northern island of Hokkaido, of which Sapporo is the capital. Two were arrested for violating the public safety ordinances and two others for interfering with police activities.

A Reuters cameraman was taken away by police but it was not immediately clear if he was among the four arrested.

The one-and-a-half hour march by Japanese and foreign activists, citizen groups and non-governmental organisations took place under heavy security ahead of the July 7-9 summit of the rich nations at the hot spring and lake resort of Toyako 70 km (45 miles) away.

The protesters banged drums and carried colourful banners proclaiming "Shut Down the G8" and yelled: "We are against a summit of rich nations". Some marched dressed in traditional Japanese summer kimonos and costumes of the local ethnic minority, the Ainu.

"They have been pushing upon us their policies. I wish they would hear and represent the voices of the people who actually live here and not be so selfish," said Mizuho Tsuboi, a 64-year-old farmer from Hokkaido.

Summits of the G8, which bring together the leaders of Britain, Canada, France, Germany, Italy, Japan, Russia and the United States each year, have become a magnet for protesters angry about everything from what world leaders are doing about climate change to the effects of globalisation.

Japan has detained and questioned dozens of people at its airports, including journalists and academics, in the run-up to the summit, although many have been allowed to enter the country after several hours.

Saturday's rally was expected to be the largest one in Sapporo over the next week and several thousand police wearing helmets and holding riot shields were in attendance.

Although the protesters generally marched peacefully, scuffles broke out with police around a truck in the middle of the march that was blasting music, and the truck's window was shattered.

Japan is concerned about violent protests as well as acts of terrorism during the summit and has tightened security around the country at a cost of some 30 billion yen ($283 million), topping the 113 million euros ($186 million) spent at the last summit in Germany.

Around 21,000 police officers are being deployed in Hokkaido and domestic media have said a similar number have been mobilised in Tokyo.