3,000 people gathered at the Cultural Palace on Wednesday morning for funeral of world-known Palestinian poet Darwish in Ramallah. 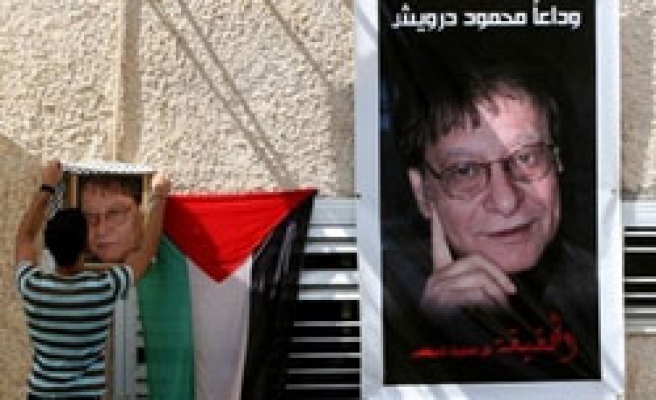 A river of some 10,000 people bearing the body of poet Mahmoud Darwish arrived at the Cultural Palace just outside the West Bank city of Ramallah on Wednesday.

Darwish's body arrived on a flight from the United States in Amman, Jordan, just before 10am. After a short ceremony the casket was loaded onto a Jordanian military helicopter which flew to Ramallah, landing at noon.

Palestinian President Mahmoud Abbas, with scores of tearful officials and dignitaries, received the flower-strewn coffin, draped in a Palestinian flag, at his Ramallah headquarters.

A vehicle topped with a yellow wreath later bore the coffin past thousands of mourners in the streets towards Darwish's grave about 4 km (2.5 miles) away.

He was to be buried on a hill near the Ramallah Cultural Palace, where he read his last poems in July.

3,000 people gathered at the Cultural Palace on Wednesday morning. More joined them, marching from the presidential compound in central Ramallah. The poet is to be buried on a hillside overlooking the cultural complex, reported Ma'an News Agency.

Darwish, the Palestinian national poet, died in a Huston, Texas hospital on Saturday following open heart surgery. He was 67.

Darwish's award-winning poetry, translated into more than 20 languages, captured the feelings of many Palestinians and Arabs.

"He did not die, because he left a legacy of poetry behind him. He is immortal in our hearts," businessman Mohammad Saqf al-Heit said beside the plot where Darwish was to be buried.

During three days of national mourning, portraits of the poet have hung in the streets of Ramallah, together with his famous line: "There is much on this land worth living for".

In the Hamas-controlled Gaza Strip, Mahmoud al-Zahar, a senior leader of the Hamas, described Darwish as a symbol of Palestinian culture and literature whose poetry crossed psychological and geographical boundaries.

"Darwish has managed to break many of the taboos between the occupier and the people who resist the occupation," he said.

Many ordinary Gazans were saddened by Darwish's death.

"Darwish was Palestine personified in a man... A man full of love, nationalism and passion," said teacher Menna Ali.

"I wept as I never did before and I will weep every time I read or recall one of his great poems," she told Reuters.

Hundreds of buses coming from all over Palestine and the interior of Israel brought mourners to Ramallah. Groups also came from the occupied Golan Heights and Lebanon.

Born in territory that is now in Israel, Darwish was jailed several times by the Israelis for his political activities. He left in 1971 for the Soviet Union. Exile in Cairo, Beirut, Tunis and Paris followed. He made his home in Ramallah in the 1990s.

Far from Ramallah, a procession will leave the Ahihud junction, east of Acre, heading toward the former village of Al-Birwah, where Darwish was born. A symbolic funeral will be held there, as youth recite Darwish's poems. Al-Barweh was destroyed by Israeli forces in 1948.