The United Nations urged hundreds of staff to stay at home on Tuesday as crowds of Sudanese gathered to protest against war crimes charges levelled against their president by an international prosecutor. 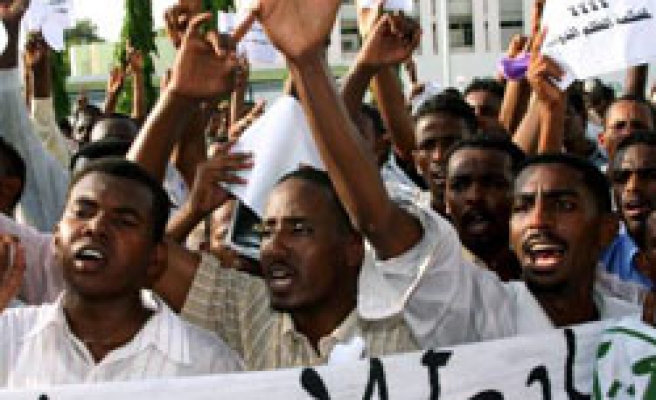 The United Nations urged hundreds of staff to stay at home on Tuesday as crowds of Sudanese gathered to protest against war crimes charges levelled against their president by an international prosecutor.

Protests since Sunday have been staged by pro-government bodies but even Sudanese who traditionally oppose Bashir have backed him against The Hague-based ICC. Tuesday's protest began slowly with a few thousand people still gathering downtown.

Demonstrators have hung pictures of Bashir on the walls of the U.N. headquarters in Khartoum and the British embassy.

U.N. security officials told non-essential staff to stay at home on Tuesday ahead of the expected protests.

Sudan's Vice President Ali Osman Mohamed Taha called the ICC move "irresponsible, illegal and unprofessional," saying the charge was part of a conspiracy to prevent Sudan from being a normal member of the international community.

He said Sudan had requested an emergency foreign ministers meeting of the AU Peace and Security Council (PSC), which he expected would take place before the end of the week.

Asked about the ICC charge, he told reporters: "The targeting of African officials is unacceptable."

AU officials have expressed concern that the ICC's first four cases have only targeted African conflicts.

A group was formed on the social networking site Facebook to support Bashir after the ICC announcement and within a few hours it had attracted almost 1,000 Sudanese at home and abroad.

"I am someone who doesn't agree with Bashir and the way he runs the country ... but when there is a challenge to the nation and its sovereignty, it's another issue," the group's creator, Ahmed Hashim Ibrahim, wrote.

Sudan's government has reassured international workers it will ensure their safety, but the United Nations raised security levels in Khartoum and Darfur ahead of the Hague court's announcement, fearing a violent backlash.

Families have been evacuated from Khartoum and non-essential staff moved out of Darfur.

Many aid agencies said they had pulled staff from rural areas back to towns in Darfur. U.N. spokesman Brian Kelly said life-saving activities were continuing in the world's largest humanitarian operation.

The joint U.N.-African Union peacekeeping mission, or UNAMID, said it would relocate 200 non-essential staff on Tuesday primarily to Uganda or Ethiopia, although core operations would continue.