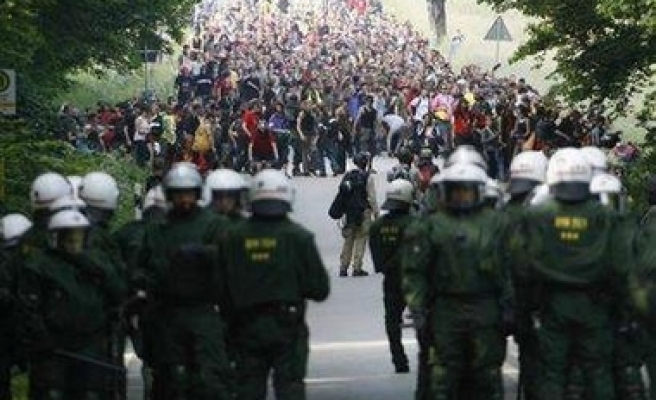 An estimated 10,000 demonstrators had reached the fence by early afternoon, police said, while other protesters blocked roads leading from the airport to the summit site of Heiligendamm on the Baltic Sea coast in northern Germany as leaders arrived on the first day of the three-day summit.

Police said the protesters bypassed security checkpoints to reach the fence, but they had not breached the barrier itself at any point. At one section, protesters chanted "Peace" and "Free G-8! Free G-8!" while riot police wearing helmets and bearing transparent shields massed inside.

"What they're doing behind that fence is illegitimate," said Philipp Schweizer, a 26-year-old social worker from Munich. "They're making decisions about countries who don't have any representation."

Some police held the leashes of dogs as they watched the protesters, which numbered more than 150 near the small town of Hinter Bollhagen, less than two miles from the summit site.

Elsewhere, one group laid branches across a small-gauge railway used to transport journalists to Heiligendamm from the summit center in nearby Kuehlungsborn, while other protesters blocked two routes leading from the airport in the city of Rostock.

Protesters who reached the fence targeted two police control points, pelting them with stones before authorities turned water cannons on them, police spokesman Manfred Luetjann said. He did not say if there were any injuries or arrests.

Video taken by AP Television News shows the water cannon firing above the protesters, with water spraying over them but not hitting them directly.

"We wanted to prevent this from happening but now they are there and we are handling it," Luetjann told The Associated Press by telephone.

After protesters rushed to the fence, Germany's constitutional court upheld a lower court's ban on a protest march that would have begun at various points and converged on Heiligendamm. The Karlsruhe-based federal court upheld a ban against protests within 200 yards of the fence.

The incident came after a protest Saturday in nearby Rostock where several thousand black-hooded protesters hurled rocks and bottles at police near the end of a march and rally by some 25,000 people. Some 400 police officers were injured.

A police spokesman, Frank Scheulen, said most of the demonstrators who had reached the fence Wednesday were peaceful, "but of course we have to assume that there could be potentially violent protesters among them."

"We will take all necessary measures," to ensure the security, he said.

Luetjann said that protesters had blocked two roadways from Laage airport, where Air Force One landed the day before, and where leaders including Russia's
Vladimir Putin and Britain's Tony Blair were expected later in the day.

"If we can block them, if they can get their lunch with a few hours' delay, that is fine," Emil Begtrup-Bright, who said he was a member of the left-wing grass roots group called Socialist Youth Forum, told Denmark's TV2 News channel.
Last Mod: 06 Haziran 2007, 17:28
Add Comment