Thousands remained Wednesday despite fears of a new assault by the Lebanese army to crush militants holed up inside. 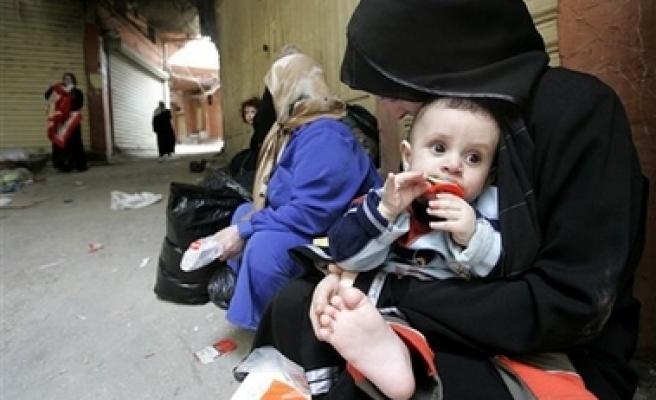 The living room was buried in rubble; some walls were collapsed and others had gaping holes.

Surveying the devastation to his home Wednesday, Omar Rashed, a 65-year-old retired teacher, said pointedly: "My house is civilian, not a military outpost."

During three days of shelling by the Lebanese army, Rashed said he, his family and many of his neighbors huddled in a tiny room, praying as their children cried.

They had no electricity or food. The little water they had — all the water tanks in the area had been hit — they mixed with sugar and gave to the children, while the adults tried to quench their thirst by wetting their lips.

Still, Rashed did not join the exodus from the camp, saying he did not want to abandon his home.

About half the 31,000 residents of Nahr el-Bared have fled the camp since a fragile truce took hold Tuesday night, streaming out in cars, pickup trucks, minivans and on foot. But thousands remained Wednesday despite fears of a new assault by the Lebanese army to crush militants holed up inside.

Shops and parked cars were torched, windows were shattered in buildings, and the narrow streets of the camp were strewn with wreckage, garbage and dead rats.

Children carrying teddy bears or plastic bags full off clothes hurried behind weeping mothers heading out of the camp. Farmers led their cows to the safety of nearby fields. Some families carried little more than a few clothes and, most importantly, their ID cards — a crucial document to show soldiers at checkpoints outside the camp.

Rawa Freiji, 9, cried uncontrollably in the back of a car alongside her brother and sister. "We live day by day," said their mother, Hayat Freiji, 40, who had no news of her 17-year-old son. He did not have his ID when he left home Tuesday and she worried he might have been arrested."

The battle is a new blow for the refugees, Palestinians who fled or were driven out of Israel during the war that erupted with the country's creation in 1948 and their descendants, born and raised in Lebanon's impoverished camps.

"I would have been better off had Palestine died altogether" in 1948, said 92-year-old Ahmed Kanaan, who fled Nazareth — now in northern Israel.

"We are treated like dogs," said the old man, stroking his long white beard as he smoked a cigarette. "They step on us and continue walking."

He is too sick with heart problems to leave Nahr el-Bared, so he and his 37-year-old daughter, Intisar, are staying in the camp, come what may.

Lebanon's Defense Minister Elias Murr issued an ultimatum Wednesday to the Fatah militants in the camp to surrender or face military action, increasing fears the army will renew its bombardment soon — or even attempt a foray into the camp.

Fatah Islam has vowed to stay and fight. On Wednesday afternoon, a half-dozen Fatah gunmen dressed in military fatigues stood outside their office in the middle of the camp.