Thousands of demonstrators determined to conduct a sit-down protest at the G8 summit evaded a police road block and streamed towards the summit venue Wednesday. 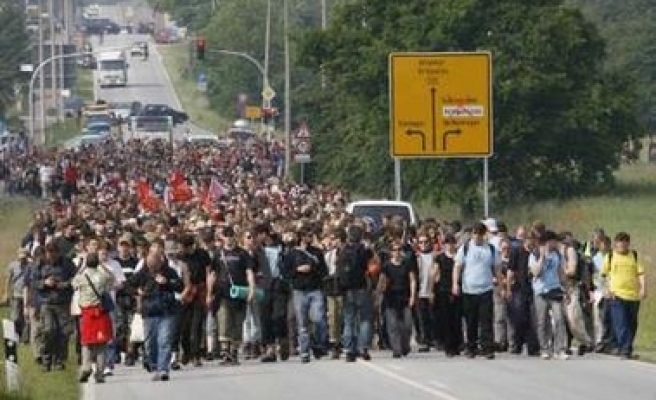 Thousands of demonstrators determined to conduct a sit-down protest at the G8 summit evaded a police road block and streamed towards the summit venue Wednesday.

Only 50 police were posted near a protest camp at Reddelich, a village close to the summit press centre in Bad Doberan. The protesters ran through woods.

On a road at the other side of the woods, they hurled branches of trees onto the tarmac to briefly obstruct police vehicles and enable a further advance. Ten police helicopters observed the cat-and-mouse game from above.

Police had earlier warned the public in Germany to expect delays on roads near the Heiligendamm G8 summit because of sit-down protests.

Ulf Erler, a spokesman for the summit police unit code-named Kavala, said on ZDF television 30 demonstrations were planned for Wednesday in the Baltic coast area.

Police have coordinated in advance with the protesters. Under a policing approach known as de-escalation, the police are expected to tolerate crowds holding up traffic briefly.

Erler appealed to the German public to put up with any delays caused by sit-down protesters. This was implicit in the de-escalation strategy, he said.
Last Mod: 06 Haziran 2007, 12:58
Add Comment