"Any efforts or attempts to use force in this situation would be extremely counterproductive," Russia's U.N. envoy said. 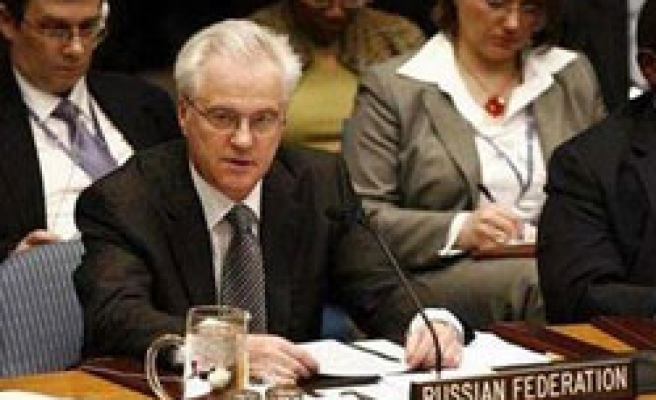 Russia's U.N. envoy said on Friday that threatening Iran with military action over its nuclear program could undermine newfound momentum in the drive by six world powers to resolve the standoff with Tehran.

Earlier this month European Union foreign policy chief Javier Solana went to Tehran to deliver a revised offer of economic and political incentives from the United States, Britain, France, Germany, Russia and China in exchange for a suspension of Iran's most sensitive nuclear activities.

Iran has made clear that it does not plan to halt its uranium enrichment program, which could be used to make fuel for power plants or atomic weapons. A U.S. official said this stance could lead to a new round of sanctions against Iran.

But Western diplomats said Tehran had shown an increased willingness to discuss the offer compared to June 2006, when it was first made to Iran. This view was confirmed by Russia's U.N. envoy after a Security Council meeting on Kosovo.

"What we have now, for the first time in a while, we have something of a diplomatic momentum on the heels of Mr Solana's trip to Tehran, with a new expanded and enlarged package," Russia's U.N. Ambassador Vitaly Churkin told reporters.

This new momentum "can and should be exploited in the dealings of the six with Iran," he added.

Churkin was also asked about a New York Times article that cited U.S. officials as saying Israel carried out a large military exercise this month that appeared to be a rehearsal for a potential bombing attack on Iran's nuclear facilities.

He declined to comment on the article itself but said threats of force against Iran, or attempts to impose sanctions outside of the U.N. Security Council, would be a "distraction" that would undermine the delicate negotiations with Iran.

"Any efforts or attempts to use force in this situation would be extremely counterproductive," Churkin said.

"If things start happening outside of that joint strategy (of the six), like threats of the use of force against Iran or discussion of unilateral sanctions against Iran ... it is distracting from the negotiating process," he said.

The United States and European Union have warned Iran that they could impose further sanctions that go beyond current U.N. sanctions if Tehran refuses to freeze its enrichment program.

The U.N. Security Council has already imposed three rounds of sanctions on Iran for refusing to suspend its enrichment program, which Tehran says is intended solely for the peaceful generation of electricity.

Diplomats say it is unlikely that the council would have the time to negotiate and agree on a fourth round of sanctions before the U.S. presidential elections in November.

But Washington made it clear that it would not wait to push for more and tougher sanctions if Tehran remains defiant.

"The determining factor in terms of the timing of the consideration of further measures is Iran's behavior, not the electoral calendar," said Benjamin Chang, a spokesman for the U.S. mission to the United Nations.

Given the new momentum with Iran, Churkin said it was theoretically possible "to finally reach a political and diplomatic outcome to the Iranian nuclear issue."

Western diplomats said that they hoped Iran would take the offer of holding "talks about talks" aimed at launching formal negotiations with Tehran on the offer. All Iran would have to do to begin these preliminary talks is to agree not to expand its enrichment program for the time being, they said.