Time is ripe for civilian measures despite warmongers

In Diyarbakır, a predominantly Kurdish city in S Turkey, this year the municipality has decided to celebrate March 8, International Women's Day, in Chinese. But why? 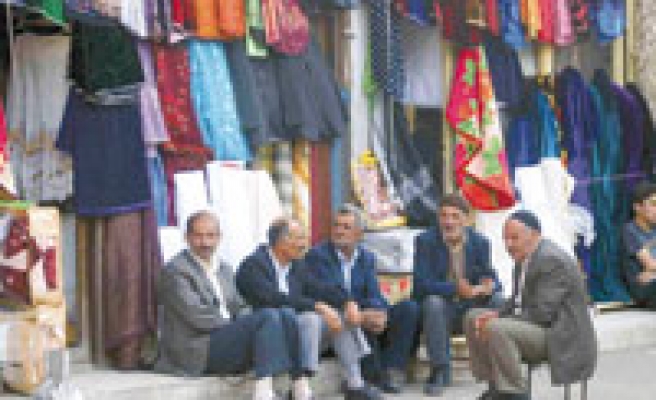 In Diyarbakır, a predominantly Kurdish city in southeastern Turkey, some billboards show pictures of various women along with text written in Chinese characters. This year the municipality has decided to celebrate March 8, International Women's Day, in Chinese. But why?

In general elections last year, Erdoğan's AK Party won more than 50 percent of the vote in Kurdish-dominated areas, much to the chagrin of the DTP, the party that is seen as the main representative of Kurds.

"Whenever we have any messages in Kurdish, we are subject to prosecution," said Şefik Türk, deputy mayor of the local Yenişehir district in central Diyarbakır who also belongs to the pro-Kurdish Democratic Society Party (DTP). Municipalities in Diyarbakır constantly face the threat of legal action for using Kurdish in official texts. Türk said there are five court cases and three investigations into Yenişehir Mayor Fırat Anlı because he used Kurdish in his official messages to the public.

Firstly, municipal officials wanted to react to previous actions of the state restricting the use of Kurdish in official invitations or celebratory messages and secondly, they wanted to create some empathy with the region's Kurdish citizens who for years have been addressed in Turkish, a language they did not understand, explained Türk.

"We also wanted to express our respect for the cultures and languages of other people," he added.

The March 8 posters, also prepared in Kurdish and Turkish, read "We congratulate all our women on March 8, International Women's Day, believing in a future of peace, democracy and equality."

These messages of peace, democracy and equality reflect Turkey's Kurdish citizens' long-awaited desire to be recognized as Kurds. The Turkish Constitution provides a single nationality designation for all Turks and thus does not recognize ethnic groups as national, racial or ethnic minorities.

Critics agree Kurds should be recognized in the new civilian constitution which is being drafted to make it more democratic by a commission appointed by the Turkish government.

The European Union, of which Turkey hopes to be a member one day, has been urging Turkey to grant greater rights to the Kurds, who make up about a fifth of the country's population of 70 million. The Turkish government has implemented a number of reforms in recent years, including legislation that relaxed restrictions on Kurdish language broadcasts and education in Kurdish.

Facing lawsuits for using the Kurdish language in official correspondence with Turkey's Kurdish citizens is quite ironic considering the fact that foreigners living in Fethiye, a town within the municipality of Ölüdeniz, demanded municipal announcements to be made available in both Turkish and English -- a request the mayor responded to positively on March 3.

Turkey has recently been concentrating on the military aspect of the solution as it launched an eight-day-long ground offensive into northern Iraq against the outlawed Kurdistan Workers' Party (PKK) on Feb. 21. The PKK wants an autonomous Kurdish area in eastern Turkey and has repeatedly attacked the Turkish military and, sometimes, the civilian population since the 1980s in a conflict that has left more than 35,000 dead.

Political tension has grown since the military pulled out on Feb. 29 following accusations from opposition parties that the government bowed to US pressure to end the offensive prematurely.

However, solution-seekers think it is now high time for Turkey to take bold and effective steps to resolve the Kurdish issue, an issue the PKK feeds on.

"The most important advantage that came along with the latest ground offensive is the fact that it has brought Turkey closer to a political solution to end the PKK problem," wrote Zaman daily's Mümtaz'er Türköne.

He says the circumstances today are as appropriate for ending the problems of the Kurds as they were when PKK leader Abdullah Öcalan was captured in 1999.

"As PKK terrorism has been put under control, we can roll up our sleeves to end the Kurdish problem. If every war is to have a goal, the goal of the latest operation should be to settle the Kurdish issue on political grounds," he asserted.

His words have been echoed by observers in the region.

Reyhan Yalçındağ, who works mostly in Diyarbakır as the vice president of the Human Rights Association (İHD), said a wrong move has been avoided by cutting the military operation short.

"As dead bodies arrive from northern Iraq, both Turks and Kurds lose their common sense, and a huge gap between Turks and Kurds appears. They cannot discuss civilian measures in a military-dominated environment," she said.

Adding that the PKK is not a reason but an outcome of the problems, she noted that as recently as 30 years ago, Kurds were dismissed as "mountain Turks" and that speaking Kurdish was illegal, while arguing for Kurdish language rights was a criminal offense.

It was considered a huge symbolic breakthrough when Prime Minister Recep Tayyip Erdoğan admitted in 2005 that Turkey had a "Kurdish problem." Before that, politicians referred to the issue as the "Southeast problem" or "problems of identity."

To the cheers of crowds in Diyarbakır, Erdoğan described the situation as "my problem, our collective problem."

In general elections last year, Erdoğan's Justice and Development Party (AK Party) won more than 50 percent of the vote in Kurdish-dominated areas, much to the chagrin of the DTP, the party that is seen as the main representative of Kurds.

The prime minister is readying to announce an action plan in a couple of weeks to address the issues. The action plan is being prepared as a result of a three-month tour in nine cities of the region by Deputy Prime Minister Nazım Ekren, who has finalized studies on the Southeastern Anatolia Project (GAP), a regional development project.

The giant development project evolves around building dams to tap the waters of the Euphrates and Tigris rivers to produce energy and increase agricultural activities. GAP was launched 25 years ago, and $35 billion was spent on hydroelectric plants and irrigation systems. So far 60 percent of the project has been completed, but it remains in need of more support for the irrigation systems. Investments have been unable to erase differences between the underdeveloped and mostly Kurdish Southeast and the rest of the country.

Erdoğan gave Ekren orders to complete GAP in four to five years in order to improve the region's investment climate and thereby contribute to the region's development.

"GAP isn't only an economic project but also a critical project in which social, political and cultural change can be realized," Ekren said.

Ekren anticipates a $10,000 per capita income in 2013 and a place for Turkey among the top 10 economies of the world. His projects include transforming the Southeast into an organic clothing hub for the world.

"In fact, these economic, social and cultural problems have been felt throughout Turkey, but more intensely in the region," he said. "We reject using the label 'Kurdish problem' because it creates a negative image of good Kurdish citizens."

In response to those asking why the region's populace does not rebel against PKK terrorism, Aydemir said the PKK frightens the Kurds of the region, making powerless people mute.

"We have a huge unemployment problem here. I can say six in 10 people are jobless in the East. And I can say eastern Anatolia is even less developed in comparison to the Southeast."

He suggests regional incentives such as a cut in the cost of natural gas and electricity to attract more businessmen to invest in the eastern and southeastern provinces. Among his proposals is the promotion of winter sports in such mountainous areas as Erzurum and Kars.

In addition, the İHD's Yalçındağ asks for compensation for damage the public suffered during the fight against terrorism.

"There is poverty due to war. About 3,800 villages had been burnt down in the war. These people need to be compensated," she stressed.

She also calls for a law consisting of a general amnesty which would urge PKK members to leave the terrorist organization.

Kurds hope Prime Minister Erdoğan is prepared to talk with the PKK and work out the details of an amnesty arrangement. DTP officials think a general amnesty would allow the PKK to "come down from the mountains without losing face."

An "active repentance" law has provided opportunities for some PKK members. A total of 295 people who left the terrorist organization have returned home under the active repentance law since January 2005, official figures indicate.

The ex-PKK members who left the PKK's hideouts in the mountains of northern Iraq and surrendered to Turkish officials were reunited with their families without being sentenced to prison terms, as guaranteed by Article 221 of the Turkish Penal Code (TCK).

The article stipulates that members of the terrorist organization who turn themselves in will be released without punishment as long as they have not been involved in any armed clashes with security forces or any other terrorist attacks against Turkey.

Burhan Kayatürk, a Kurdish AK Party deputy from the eastern province of Van, has been discouraged by the opposition's recent stance, which insists on a military offensive against the PKK. He said if the PKK surrendered its arms, reforms would follow more easily

"In this environment, political steps are hard to take," he said.

On the other hand, Esat Canan, who served two terms in Parliament with the opposition Republican People's Party (CHP) from Kurdish Hakkari province but resigned in protest of the CHP's tough stance on individual freedoms and democracy, believes a solution to the PKK problem would be based on Turkey's continued democratization and improved standards of living for all citizens.

"Yes, the PKK should give up its arms, but a solution to the Kurds' problems should not be conditional on this. We have problems related to democracy," he said. Canan believes the military has completed its mission against the PKK and that the time is right for the government to introduce civilian reforms. "The government should act with courage and bring about civilian measures to the country's long-standing problems."