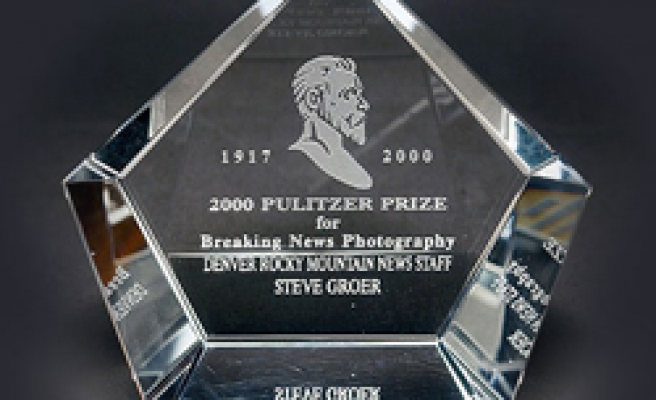 Reporter Usha Lee McFarling and photographer Rick Loomis teamed with Weiss to create the stories, photo galleries, animated graphics and videos (posted at latimes.com/oceans) that evoked a broad and emotional response from citizens and political leaders.

"We cling to this notion that the oceans are too big to change. But it turns out they are not. The oceans are suffering from an accumulation of assaults," said Weiss, who grew up surfing and scuba diving in his native California. "We need to be much more careful what we are pulling out of the ocean and what we are dumping into the ocean."

No one publication dominated this year's journalism prizes, although the Wall Street Journal made a strong showing by winning two: the international reporting citation for its stories about the adverse effects of China's booming capitalism and the award for meritorious public service, for its expose of top business executives who manipulated stock-option grants to give themselves massive payouts.

The Journal's stories on so-called option backdating were just one of several examples of the invaluable watchdog function served by newspapers in 2006, said Pulitzer administrators at Columbia University.

"When newsroom budgets are being reduced and the news media facing so much criticism, the winners and finalists this year show that there's still high-quality journalism being produced across the country," said Pulitzer Prize administrator Sig Gissler. "When you think about it, who would be doing this work if we didn't have newspapers?"

The Pulitzer panel praised the Wall Street Journal journalists — including Charles Forelle, James Bandler and Mark Maremont — for a "creative and comprehensive probe." Academic research had speculated that corporate executives might be manipulating the dates on stock options to increase their value — a lead that special projects editor Maremont brought to his colleagues.

Forelle, a Yale math major, suggested a probability analysis to assess the likelihood that options would have fallen by chance on extremely advantageous dates. Dozens of stories followed, leading to internal or outside investigations of at least 264 companies.

Among the many executives caught up in the probe was UnitedHealth Group Inc. Chief Executive William McGuire. McGuire, the head of one of the nation's largest health insurers, lost his job. Along with a colleague, he was forced to give back more than $390 million in options compensation.

"It's gratifying as newspaper reporters to have such a wide impact and clean up such a dark corner of corporate America," Maremont said. "And I think capitalism is better for it. People shouldn't be cheating."

Among the other finalists for the journalism prizes were The Times' Baghdad writers, who won praise for their "courageous chronicling" of the increasingly fractious landscape in Iraq. Cited for their coverage were Bureau Chief Borzou Daragahi and reporters Louise Roug, Megan Stack, Solomon Moore and Shamil Aziz.