Letters from survivors of the Titanic and a deck log from one of the ships that searched for its ill-fated passengers are just some of the items for sale at an upcoming auction of ocean liner memorabilia. 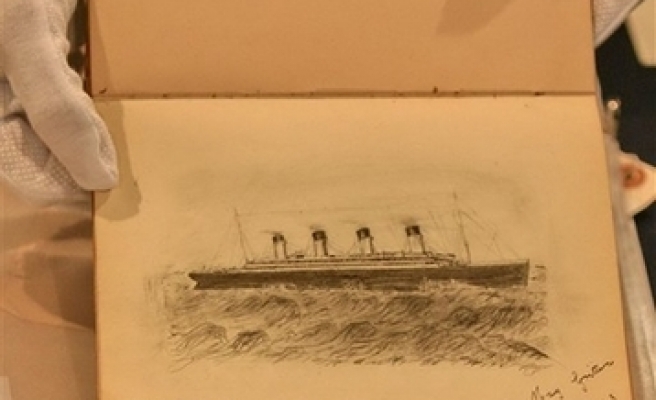 Letters from survivors of the Titanic and a deck log from one of the ships that searched for its ill-fated passengers are just some of the items for sale at an upcoming auction of ocean liner memorabilia.

The 18 Titanic lots are scheduled to go on the auction block on Thursday.

The deck log from cable ship S.S. MacKay-Bennett, the second ship on the scene after the R.M.S. Carpathia, has a pre-sale estimate of $30,000 to $40,000. Christie's has billed the log as the most significant artifact from a rescue ship ever offered for sale.

S.S. MacKay-Bennett was the first of four ships chartered by the White Star Line to search for bodies after the Titanic, carrying more than 2,000 passengers, hit an iceberg that destroyed it. The chief embalmer from Nova Scotia's largest undertaking firm was stationed onboard the MacKay-Bennett to oversee the operation.

After seven days of searching, 306 bodies were recovered — almost twice as many as the number of available caskets.

Also for sale is the Titanic's first-class passenger list, which includes such prominent New York family names as the Astors, Guggenheims and Strauses. It has a pre-sale estimate of $15,000 to $20,000.

An original eight-page handwritten account of one survivor, Laurie Marie Cribb, a third-class passenger from Newark, N.J., is expected to bring $10,000 to $15,000. She was rescued by the R.M.S. Carpathia, but her father perished.

Written shortly after the disaster, Cribb describes how she watched the lights go out on the ship followed by the "most terrible shrieks and groans from the helpless and doomed passengers who were left on the wreck of the great ship."

The sale also offers recovered artifacts from another famous shipwrecked luxury liner, the Andrea Doria. The Italian ocean liner was speeding toward New York on a trans-Atlantic crossing in 1956 when it collided with a passenger ship and sank, killing 46 people. The shipwreck lies on the bottom of the ocean floor south of Nantucket, Mass.