An American charged with running his own private prison and abuse of Afghan prisoners but Karzai pardoned, stays in "suite-like prison", says to be tortured if leaving claiming he was hired by US officials. 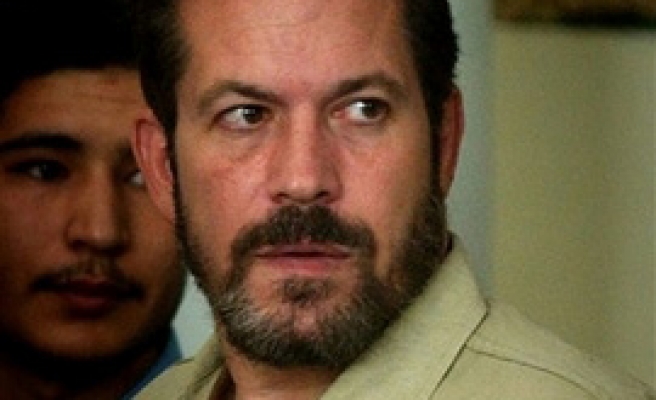 An American citizen charged with running his own private prison and abuse of Afghan prisoners in Kabul but president Karzai pardoned stays in "suite-like prison" he describes. He says will be tortured if leaving claiming he was hired by US counter-terrorism officials.

His self-described prison "suite," has its own kitchen, a private bathroom, couches, rugs, TV, Internet access and a small staff. He is also friendly with prison guards aligned with the Northern Alliance, the coalition of anti-Taliban that helped the U.S. in late 2001.

"He is allowed to keep a dog, weapons and a cook. Why? Because the anti-Taliban factions of the Afghan government have never, not once, considered him a prisoner, but a temporary guest," Idema's U.S. lawyer, John E. Tiffany, said in a recent court filing.
Idema is one of three U.S. citizens arrested in July 2004 and imprisoned at Policharki prison for abducting several Afghans and holding them in a makeshift jail in Kabul. Brent Bennet, another former soldier, was released last September, as was freelance journalist Edward Caraballo, who was filming their activities, in April 2006.

Idema claims to have fought with Northern Alliance forces against the Taliban and was featured in a book about the Afghan war called "Task Force Dagger: The Hunt for bin Laden."

Some of the Afghans Idema imprisoned in 2004 claimed they were beaten and their heads held under water. However, Idema says he never mistreated prisoners and the prosecution offered evidence at his sometimes chaotic Kabul trial, where he initially was sentenced to 10 years in jail.


"Hired by US officials"

But two months after being freed by presidential decree, Jack Keith Idema remains in his Afghan cell. They include a visa dispute and a compensation claim by one of his victims.

They also involve documents that Idema claims that he was a “hired mercenary hunting” al-Qaida suspects on a mission sanctioned by U.S. counterterrorism officials — a claim that American authorities have denied.

Idema's Afghan lawyer and prison officials say Idema could be only days from leaving the country. But Idema, a former Green Beret from Fayetteville, N.C., has appeared in no hurry to leave a prison cell that by local standards is top of the line.


Idema told AP by cell phone from Policharki that it might be hard for people to understand why he has remained after President Hamid Karzai's decree in late March that freed him.

But he said he risked arrest by Afghan intelligence agents and that departing would harm his chances of recovering documents, tapes and computer files that show his alleged relationship with U.S. officials.

"My car is parked outside right now," Idema said. "I could drive through the Policharki gates right now. Then what happens? I get arrested. (The intelligence service) will arrest me for not having an Afghan visa and they'll torture me and kill me. If I'm lucky, I'm only going to be tortured."

A U.S. federal judge in April said the United States had to respond to a lawsuit by Idema alleging that the State Department and FBI illegally kept him imprisoned, directed his torture and destroyed evidence. Idema said he has audio recordings and documents to back up his claims.

The U.S. Embassy in Kabul responded by saying that since Idema had been freed by Karzai, his claims no longer had merit.

"Mr. Idema's habeas claim is moot because his criminal sentence has expired and because his continued presence in Policharki prison is due to his refusal to leave without his personal belongings," the U.S. said in a court filing.

The U.S. said it has secured Idema a passport and helped him with travel information for him and Nina, a dog that Bennet had adopted. Idema, who is insisting on taking the animal with him, said it had received shots so that it could travel.

"Jack's attitude is he wants compensation for that, otherwise he doesn't care if he has to spend the next 10 years in prison," said Ahmadzai.

Another issue has been compensation demanded by one of the men Idema held in his prison.

The man, a senior judge called Sadiq, originally had wanted $13,000 in compensation, but told the AP that he gave Idema a letter on Friday forgiving him.

"Because I'm an Afghan Muslim, I forgive all these things," said Sadiq, who goes by one name. "I'm not his enemy, he's not my enemy."

"For us, he's completely free. He's not a prisoner. But Mr. Idema's story is that he's safer inside Policharki, so he's staying there," Ismat said. "We could have kicked him out on the street after he was pardoned, but that might not have been well received by the international community."