The first trains between North and South Korea in more than half a century have begun their journeys across the heavily fortified border between the two countries. 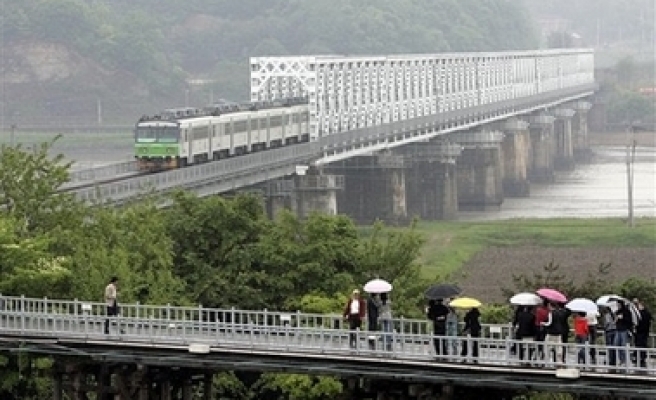 The first trains between North and South Korea in more than half a century have begun their journeys across the heavily fortified border between the two countries.

The one-off test follows repeated delays after the railway lines were eventually restored in 2003 and comes amid ongoing tensions over the North's nuclear programme.

South Korea's unification minister, who is travelling on one of the two trains involved, said the event was a symbolic step towards reconciliation on the peninsula.

"It is not simply a test run," Lee Jae-joung said. "It means reconnecting the severed bloodline of our people."

Speaking at a ceremony at Munsan station, 12km south of the Demilitarised Zone, he said "the heart of the Korean peninsula is beating again".

Kwon Ho-ung, North Korea's senior cabinet councillor, said the two Koreas "should not be derailed from the track or hesitate" in their moves towards unification.

But he warned that outside powers – a term the North usually uses to refer to the US - were the main obstacle to reconciliation between the Koreas.

"Even at this point, challenges are continuing from divisive forces at home and abroad who don't like reconciliation and unification of our people," Kwon said.

More than 50 years after the end of the Korean War, North and South Korea remain officially at war, never having signed a formal peace treaty.

The last train to try crossing the border was stopped by American soldiers on December 31, 1950, after which railway links were blown up.

On Thursday at the South Korean station of Munsan, volleys of coloured fireworks were let off as the train bound for North Korea moved into position in front of a red-carpeted platform for passengers to board.

The train test was approved last week during rare military-to-military talks which agreed on security procedures for the cross-border trial.

The trains taking part in Thursday's test run, each carrying 150 people, are using two separate tracks on the east and west of the peninsula.

On each train are 100 South Korean passengers and 50 North Koreans.

One train originates from the South Korean side and will travel about 25km into North Korean territory before turning back. The other train is travelling from the North.

To entice the North to allow the crossing, South Korea offered some $80m in aid for its light industries.

South Korea, which shares a border only with the North, has said it sees east and west railway lines eventually being used to send passengers and cargo through North Korea into China and Russia and to link up with the Trans-Siberian railway.

The South's export-driven economy could see huge savings in moving cargo if North Korea allows the railway link to develop.

Roh Moo-hyun, South Korea's president, this week described the test run as a "big step for the sake of the future of our nation and people".

"It will serve as an opportunity to move a step toward peace and stability on the Korean peninsula," he told his cabinet.

The high point of reconciliation between the two Koreas came in the 2000 summit meeting in Pyongyang between the then South Korean president, Kim Dae-jung, and Kim Jong-il, the North Korean leader.

To date it has been the only meeting between the leaders of the two Koreas, although other contacts have been slowly developing.

Road links have been restored since 2005 and a series of reunions have been held between families split by the division of the peninsula.

Every year thousands of South Koreans also cross into the North to visit the Diamond Mountain resort or to work in the joint-Korean industrial zone in Kaesong. Last Mod: 17 Mayıs 2007, 10:20
Add Comment