TRNC President: I have to meet Greek Cypriot leader soon

This was President of the Turkish Cypriot state Talat's second meeting with Pascoe on Tuesday. 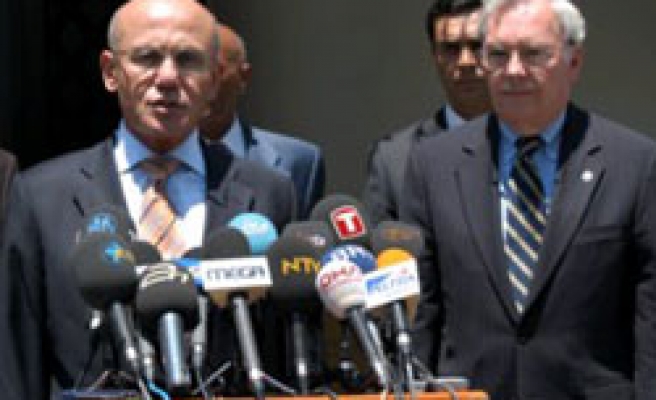 The president of the Turkish Cypriot state expressed thought on Tuesday that he had to meet the Greek Cypriot leader soon.

President Mehmet Ali Talat of the Turkish Republic of Northern Cyprus (TRNC) thought it necessary for him to have a meeting with Greek Cypriot leader Demetris Christofias.

"We have to meet as soon as possible," Talat told reporters after meeting Lynn Pascoe, the United Nations (UN) under-secretary general for political affairs.

This was Talat's second meeting with Pascoe on Tuesday.

"We continued to discuss Cyprus problem, and Pascoe briefed me on his impressions of his talks in the Greek Cypriot administration," Talat said.

Talat said he was still hopeful, but told reporters that Pascoe did not talk about any date set for a meeting with Christofias.

President Talat said that Pascoe did neither bring him a clear message, and added that the two parties had to overcome the problems.

After the meeting, Pascoe did not respond to questions and left the TRNC Presidential Office to meet Christofias over dinner.