Hundreds of Palestinian civilians carrying their belongings in plastic bags trickled out of a besieged refugee camp Wednesday, taking advantage of a truce in fighting that mostly held overnight. 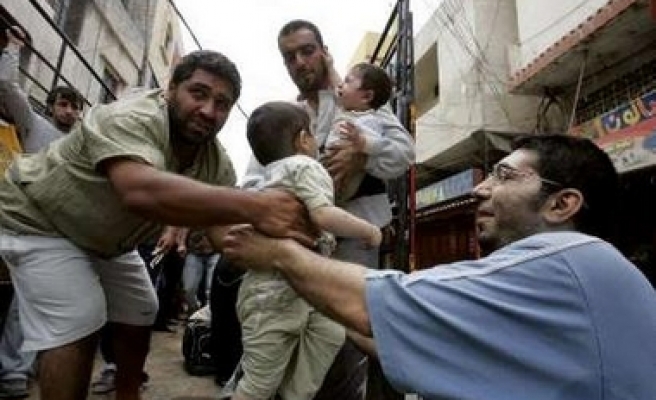 Hundreds of Palestinian civilians carrying their belongings in plastic bags trickled out of a besieged refugee camp Wednesday, taking advantage of a truce in fighting that mostly held overnight.

About 15,000 — nearly half the camp's residents — fled Tuesday night and another 1,000 left Wednesday, officials said. Those fleeing reported bodies littering Nahr el-Bared's streets and scenes of blasted buildings and destruction. U.N. officials said the bodies of at least 20 civilians have been retrieved from the camp.

It was unclear how long the truce would hold, and there were fears that allowing civilians out could be a prelude for a major showdown.

The Lebanese government has said it's determined to uproot the Fatah Islam, and on Wednesday, the army reinforced its positions around Nahr el-Bared.

A fighter who identified himself as Fatah Islam's deputy leader told The Associated Press the group would never surrender and vowed to fight to the death if attacked.

"We are ready to enter into a permanent cease-fire on condition we stay, military action against us is halted and life is allowed to return to normal in the camp," said the man who goes by the name Abu Hureira.

He sat on the floor of a dimly lit building basement deep inside the camp, the entrance packed with canned food and fruit.

"If they enter, we are ready. They can try but they won't be able to." he said, speaking with a Lebanese Arabic accent.

Occasional gunshots were heard overnight, witnesses said. But the relative lull in fighting gave residents the opportunity to flee the battle-scared Nahr el-Bared.

"It's very tense," said Rania Mustafa, 23, holding the hand of a child and carrying a baby in her arms. Other women carrying children were seen stepping over broken glass and garbage and walking around wrecked cars. A loose cow roamed on another street.

Many of the fleeing refugees have moved to a nearby Palestinian refugee camp at Beddawi, where U.N. relief officials and local provided shelter, mattresses, food and water.

Twenty-nine soldiers and at least 20 fighters have been killed since the battle began Sunday in the heaviest internal fighting in Lebanon since the 1975-90 civil war.

Taleb al-Salhani, a security officer with the U.N. agency for Palestinian refugees, said the bodies of 20 civilians — men, women and children — have been retrieved from the camp. The total number of civilian casualties remained unknown.

The small country is home to some 215,000 Palestinian refugees who live in a dozen camps rife with armed groups, including Fatah Islam.

But The Shiite Muslims of Hezbollah deeply oppose militant groups, and the movement issued a statement stressing the military's duty to safeguard the country.

Lebanese security officials accuse Syria of using Fatah Islam to destabilize Lebanon, a charge Damascus denies. Syria controlled Lebanon for decades until it was forced to withdraw its troops after Hariri's assassination.