Unmasking the "sadistic and systematic" torture of Iraqi detainees at Abu Ghraib has cost the US army general who investigated the scandal his job and made him realize he was working for a "Mafia" not the army of the world's superpower. 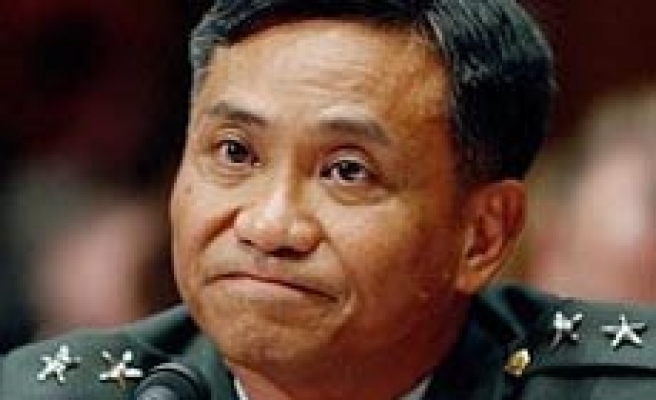 Unmasking the "sadistic and systematic" torture of Iraqi detainees at Abu Ghraib has cost the US army general who investigated the scandal his job and made him realize the was working for a "Mafia" not the army of the world's superpower.

After completing his inquiry, Taguba, whose report was not meant for public release but was rather leaked to The New Yorker in March 2004, had been scheduled to rotate to the Third Army’s headquarters at Fort McPherson, Georgia, in June of the same year.

He was instead ordered back to the Pentagon to work in the office of the Assistant Secretary of Defense for Reserve Affairs.

"I didn’t quibble. If you’re going to do that to me, well, O.K. We all serve at the pleasure of the President," he said with a smile and a shrug.

A retired four-star army general later told Taguba he had been sent to the Pentagon so that he could "be watched."

Later in 2004, Taguba ran into then Defense Secretary Donald Rumsfeld and one of his senior press aides, Lawrence Di Rita, at a gym after a workout.

Abu Ghraib will always be remembered for the sexual abuse scandal that broke out in 2004 with photos showing detainees piled up naked on the floor, chained to beds in stress positions and forced to stand naked in front of US female guards.

Taguba said he started being disillusioned with the military establishment after a brief encounter with then head of the Central Command John Abizaid.

"You and your report will be investigated," Abizaid told him.

"I wasn’t angry about what he said but disappointed that he would say that to me," Taguba recalled.

"I’d been in the Army thirty-two years by then, and it was the first time that I thought I was in the Mafia."

Seven low-ranking US Military Police officers were convicted of charges that included dereliction of duty, maltreatment, and assault.

Only one defendant, Specialist Charles Graner, was sentenced to ten years in prison.

Taguba came to the firm belief that senior Pentagon officials, chiefly Rumsfeld if not President George W. Bush himself, did now about the grisly abuses despite repeated insistence from the US administration that only a few low-ranking soldiers were involved in the macabre practices.

"From what I knew, troops just don’t take it upon themselves to initiate what they did without any form of knowledge of the higher-ups," he told the New Yorker.

"These MP (Military Police) troops were not that creative," he said. "Somebody was giving them guidance."

Taguba said the MPs were being "literally exploited" by the military interrogators.

"My view is that those kids were poorly led, not trained, and had not been given any standard operating procedures on how they should guard the detainees."

Taguba said his inquiry shows that Lieutenant General Sanchez, then army commander in Iraq, routinely visited the prison and witnessed at least one interrogation.

"Sanchez knew exactly what was going on," he insisted.

His report cited testimony that interrogators and other intelligence personnel were encouraging the abuse of detainees.

"Loosen this guy up for us," one MP said he was told by a member of military intelligence. "Make sure he has a bad night."

The lawyer of US Army Private Lynndie England, who made her presence in most of the abuse photos, had said his client was acting under orders from her superiors and the Pentagon had made her and other soldiers involved in the abuse a scapegoat.

Taguba said he did not have orders to question those above the rank-and-file.

"I was legally prevented from further investigation into higher authority. I was limited to a box."

Taguba, who was praised by then Chief of Staff General Peter Schoomaker for his honest report, accused Rumsfeld of perjury before the Senate and the House Armed Services Committees at a hearing on May 7, 2004.

"Rumsfeld was in denial," Taguba insisted.

"He’s trying to acquit himself, and a lot of people are lying to protect themselves."

Taguba said he had spent weeks briefing senior military leaders on his report, affirming that senior officials in Rumsfeld’s office knew before its release about the shocking abuses, which were available on a military CD.

Taguba said the leaked photos were the tip of the iceberg.

He added that photos and videos held by the Pentagon because of their "extremely sensitive nature" show sexual humiliation of a father with his son and an Iraqi woman being sodomized by a US soldier.

He vividly remembers his first thought upon seeing the photographs in late January of 2004.

"Unbelievable! What were these people doing?" This is big."

Taguba's team spent much of February 2004 in Iraq investigating the scandal and were overwhelmed by its scale.

"I kept on asking these questions of the officers I interviewed: ‘You knew what was going on. Why didn’t you do something to stop it?'"

He had seen classified documents revealing that there were only "one or two" suspected Al Qaeda prisoners at Abu Ghraib.

Most of the detainees had nothing to do with attacks on US troops. A few of them were common criminals.

"These were people who were taken off the streets and put in jail—teen-agers and old men and women."

Taguba, who retired in January 2007, recalled that a senior general told him he should not bother himself with the investigation because the abused were "only Iraqis."