The fire which broke out in Serik town of the Turkey's tourism heartland on July 31st destroyed at least 60 houses, dozens of farming buildings, a school and a mosque in Manavgat and Serik towns. 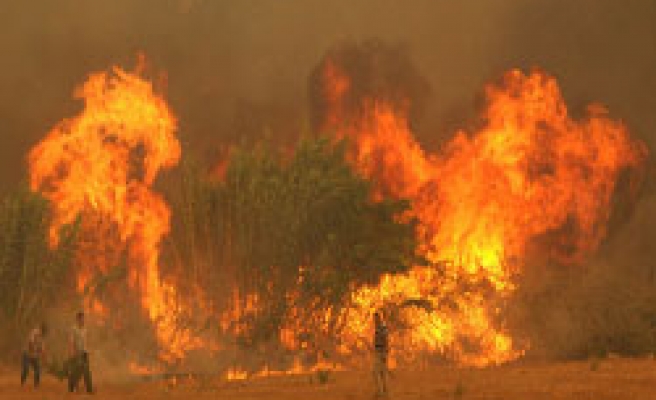 Efforts have been under way to extinguish the forest fire, now in its fifth day, in southern Turkish province of Antalya which engulfed hectares of woodland.

Aydogan Turedi, spokesman for the provincial directorate of forestry, told the A.A that the fire was partly taken under control and fire-fighting teams were trying to extinguish the fire in the villages of Cardak and Sagirin.

"Thousands of people including fire-fighters, local forestry officials and residents have been involved in tackling the fire all night. They have been backed by six helicopters and aircraft began backing the teams after dawn," he said.

"The fire in the woodland near the historical site of Olympos is still continuing. The site's location on a rocky place in the hills hampers our efforts to tackle the fire," he said added.

"The winds are expected to subside by noon, and humidity levels are also forecasted to rise. This will help our efforts to extinguish the fire," Turedi added.

The fire which broke out in Serik town of the Turkey's tourism heartland on July 31st destroyed at least 60 houses, dozens of farming buildings, a school and a mosque in Manavgat and Serik towns. Six villages were evacuated. One person died and another is reported missing in the fire. The fire also destroyed livestock in the villages and millions of trees in the woodlands.

A Turkish TV channel said a decision had also been taken to evacuate Kepez village as the fire approached, but that a change in the wind's direction had removed the danger.

Environment and Forestry Minister Veysel Eroglu said on Saturday officials thought the blaze was sparked by broken power lines. However, state power officials said this was not possible, another TV channel reported.

The blaze is close to a series of historical sites along the Mediterranean coastline, notably an ancient Greek amphitheatre in Aspendos, 37 km (23 miles) from the coastal resort of Side.

Antalya has some of the richest remains of Greek civilisation in Turkey and receives the greatest share of tourists to Turkey with 7 million tourists each year, mostly during the summer period.