Amid growing global and domestic concern over increasing food prices, the Turkish Agricultural Board (TMO) is moving rapidly to import grain to replenish depleting stocks in its warehouses and calm worries. 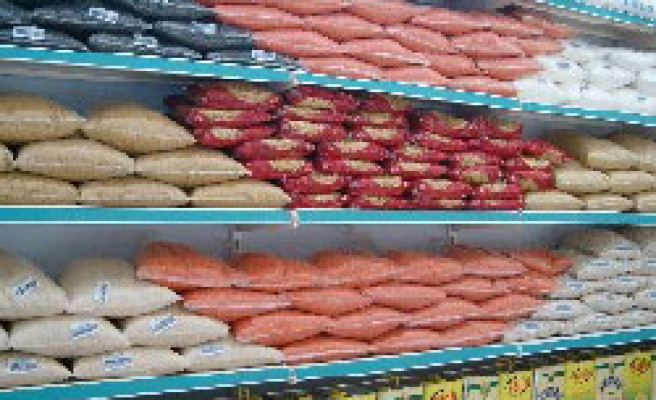 Organizations representing consumers have turned up the heat on the government, criticizing it for not doing enough. "We want the government to exercise its regulatory duty more effectively and strongly," said Bülent Deniz, head of the İstanbul-based Consumers Union.

"Price hikes are on basic consumer necessities, and there is no replacement for these. The government needs to be proactive," he told Today's Zaman.

In a bold regulatory move, Turkish Agriculture & Rural Affairs Minister Mehdi Eker said on Tuesday that "the TMO will start selling rice well under the market price to deflect an inflationary move on grain products. He also proposed what some saw as a bizarre solution to the problem, saying, "If needed, we [will] stop consuming rice for a couple of days and start eating wheat [bulgur]."

Turkish Industrialists and Businessmen's Association (TÜSİAD) Chairman Arzuhan Doğan Yalçındağ also commented, saying: "As you know, food prices are rising in the world. It is unfortunate that some other factors are present in Turkey. It seems to be aggravating inflation figures."

On the other hand some argue that domestic production will be able to meet demand in Turkey, provided that the government lends enough support to the sector. Edirne Chamber of Agriculture head Cengiz Yorulmaz said yesterday, "If the dam projects are completed in places like Hamzadere, Çakmak and Su Akacağı, we will be able to boost our production dramatically." Edirne along with other producers in Thrace is currently meeting 55 percent of domestic demand.

The TMO has released substantial amounts of grains to merchants in the domestic market to control prices, purchasing 100,000 tons of wheat from European and Asian trade markets and also placing an order for an additional 50 tons of rice to prevent price increases. Turkish officials are scrambling to alleviate public concern and issue stern warnings to market speculators attempting to take advantage of soaring food prices.

The TMO posted a flashing press release on its Web site saying "there is no cause for alarm." It said the price increases were not directly related to demand in the consumer market; according to the statement there are currently 200,000 tons of rice in stock in private hands. In 2007 Turkey produced 400,000 tons of rice in addition to 70,000 tons of rice imported by the TMO; annual rice consumption in Turkey amounts to 550,000 tons. Eker reflected the same sentiment on Monday, saying, "We have enough [rice in] stock to get through the new harvesting season." He also dismissed media reports saying that the TMO had sold 50 tons of rice to only four traders, saying that 77 businesses had been involved in rice purchases from the TMO. The Agriculture and Rural Affairs Ministry also released a full list of rice buyers on its Web site.

Rising food prices have caused another interesting development in Turkey. For the first time, merchants have begun to purchase wheat still in the field a month before harvest. In the meantime, Agricultural Association of Turkey General Director İbrahim Yetkin has warned of a looming crisis in the agricultural sector, saying the situation is worse than that of 2001 because the market contracted 7.3 percent in 2007. He said wheat production fell to 17,234,000 tons last year from 19 million tons in 2001; bean production also decreased 11.6 percent last year, dropping to 1,264,000 tons. On the other hand, Yetkin argued, despite last year's severe drought, corn, rice and sunflower seed production increased thanks to government production subsidies between 2001 and 2007.

In the meantime, price hikes and ensuing social unrest are spreading all over the world. Rioting in response to rising food prices has broken out recently in Egypt, Cameroon, the Ivory Coast, Senegal, Ethiopia and Haiti. The World Bank has warned that 100 million people are at risk of starvation. The UN has called on the international community to take urgent action against the global food crisis, warning that escalating prices could undo years of progress in poverty alleviation. UN Secretary-General Ban Ki-moon said on Monday that immediate measures were needed to meet food demands and combat rising costs.

The United States has authorized the release of $200 million in emergency food aid to help alleviate food shortages worldwide, the White House said in a statement on Monday. "This additional food aid will address the impact of rising commodity prices on US emergency food aid programs and be used to meet unanticipated food aid needs in Africa and elsewhere," the statement said. The pledge by the US, the largest provider of food aid in the world, comes a day after the World Bank announced a "new plan" to help those affected by the crisis and, along with the International Monetary Fund (IMF), urged wealthy nations to contribute $500 million toward easing the problem.