Turkey-Africa Cooperation Summit hosted by Turkish President Abdullah Gul began in Istanbul on Monday with the meeting of high-level officials. 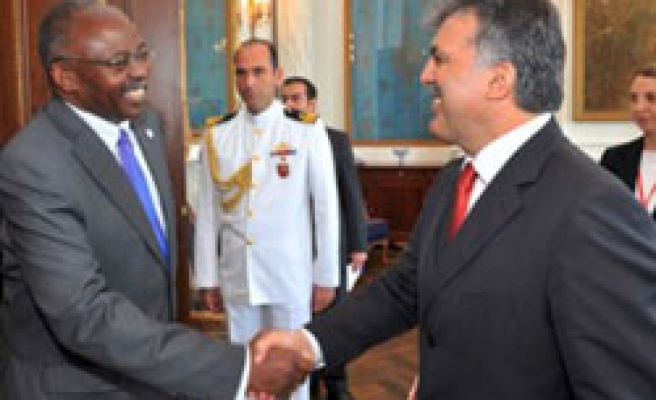 He called on Turkish and African businessmen to strengthen commercial ties for a permanent upward trend in economic relations.

Hisarciklioglu regarded Turkey as a country importing stability to neighbouring countries and added that it had the capacity to transform surrounding countries while completing its own economic transformation.

Hisarciklioglu said in the face of globally soaring food prices, Turkey's advanced agricultural techniques could be employed in the rich and vast African soil to fight the famine in African countries. He added that Turkish and African companies could cooperate in the operation and marketing of African mines.

He said only in 2007 Turkish construction companies completed projects worth a total of 6 billion USD noting that Turkish private sector could contribute to the growth of African economies through direct investments.

Turkey-Africa Cooperation Summit hosted by Turkish President Abdullah Gul began in Istanbul on Monday with the meeting of high-level officials.

The meeting is taking place at Four Seasons Hotel in Besiktas district.

A meeting of foreign ministers attending the Summit will also be held on Monday.

Representatives from 50 countries are expected to participate in the Summit.

The summit, which helding under the banner of "Solidarity and Cooperation for a Common Future,"also hosts representatives from around 20 international bodies such as the UN, African Development Bank, and the Arab League.

The three-day summit will be officially launched on Tuesday with the participation of Turkish Prime Minister Recep Tayyip Erdogan.

On the sidelines of the summit a Turkish-African Business Forum will also be held.

Turkey, which has signed liquefied gas agreements with Algeria, is seeking to boost investments and trade with sub-Saharan Africa, following similar moves by emerging powerhouses China and India.

Turkey has 12 embassies in the continent and plans to increase the number to 27 through next year.

"In recent years the continent became the focus of attention of several countries like China, India and Japan because of its rich energy and mining resources," a Foreign Ministry official said.

"It is Turkey's obligation to increase deals with Africa from the perspective of historical ties and fulfilling the potential of the continent."

Turkey not concerns about Bashir

Asked about the possibility of an ICC warrant being issued while Bashir is in Istanbul, a Turkish Foreign Ministry official declined to speculate on what Turkey would do.

"Bashir was invited to the summit as an African country leader and there is no arrest warrant against him at his moment. If there are any requests, we will evaluate them then," the official said.