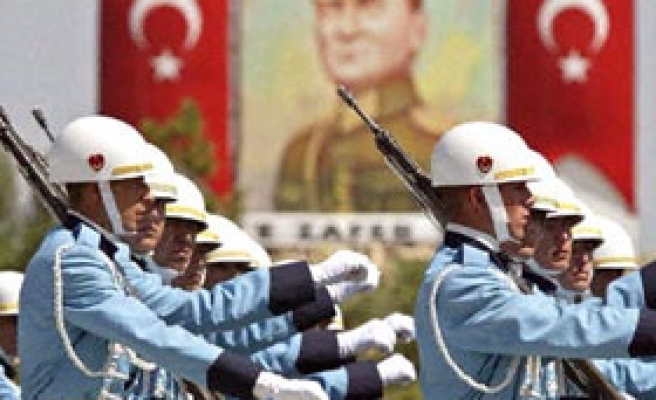 "The problem that recently came to the forefront of the presidential election process has focused on the issue of questioning secularism. The Turkish armed forces are observing this situation with concern," the army said in a statement on the General Staff's website, Agence France-Presse (AFP) reported Saturday, April 28.

"It should not be forgotten that the Turkish armed forces are a party to this debate and staunch defenders of secularism."

Earlier, parliament held a first, inconclusive round of voting to elect a president, in which the AKP was left almost alone after opposition legislators boycotted the session. Gul failed to garner the required two-thirds majority.

Although the military communique may have dealt a new hand, a second round is scheduled for Wednesday, May 2.

If the vote goes ahead, the AKP, which has 352 members in the 550-seat parliament, is virtually certain to elect Gul at the third round on May 9, when an absolute majority of 276 will suffice.

Most AKP members, among them Gul and Erdogan, belonged to the Welfare Party of Turkey's first Islamist prime minister Necmettin Erbakan, which was forced from power as a result of a harsh army-led secularist campaign in 1997 and was banned the following year.

The army, which carried out three coups — in 1960, 1971 and 1980 — had kept a relatively low-profile in recent years as Ankara carried out democratization reform to boost its EU bid.

The army warned it would not sit on the fence, threatening to intervene "when necessary."

"The Turkish armed forces... will openly and clearly display their position and attitude when necessary. No one should doubt this," it warned.

The military accused the AKP, the offshoot of a now-banned Islamist movement, of failing to prevent rising anti-secular activity in the country.

"The problem is even more serious because a major part of these activities were held with the approval and within the knowledge of the administrative authorities who are supposed to prevent them," it said.

For defenders of Turkey's secular system, who include the judiciary and the most academics, the prospect of a president with an Islamist background is proof of religion steadily creeping into politics and public life, analysts say.

Government supporters respond with charges of crisis-mongering and point to surveys that show an increasing number of Turks identifying with Islam.

The AKP has made it clear it is committed to the secular system and secured the opening of membership talks with the European Union.

But some of its actions, such as attempts to criminalize adultery, isolate alcohol-serving establishments in special zones and encourage Qur`anic courses, have fuelled suspicions of its Islamist ambitions.

Outgoing President Ahmet Necdet Sezer, whose seven-year term ends on May 16, often vetoed laws he deemed anti-secular and blocked the appointment of senior officials he saw as Islamists.

Analysts said the extraordinarily harsh statement was an "ultimatum" that could result in early general elections, and a clear indication that the powerful military does not welcome Gul as president.

"This was the strongest army statement in a long time that shows that Gul's candidacy is unwelcome, to say the least," Political commentator Cengiz Candar told AFP.

"The only meaning the statement can have is that they do not want Gul to become president," he said on NTV television.

"The most appropriate way now to try to keep democracy on track is to hold an early general election."

The main opposition, the secularist Republican People's Party, which insists the presidency cannot be left to the AKP, petitioned the Constitutional Court to annul the vote on a technicality in a bid to force early general elections.