Turkish authorities said on Wednesday they would use force if necessary to stop a May Day demonstration in the centre of Istanbul, raising tensions with labour unions. 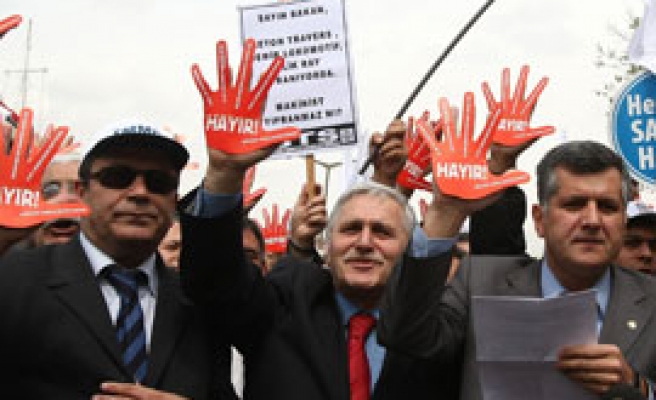 Turkey's three biggest unions plan to lead half a million members to Istanbul's central Taksim Square on Thursday. But the government, nervous because of past trouble from rallies there, has banned the demonstration.

"We will use force as the law permits ... It is natural that an illegal demonstration will be stopped," Istanbul Governor Muammer Guler told a news conference.

Dozens were also seriously injured after violent street battles on the 30 anniversary of the deaths of 37 people who were shot by an unknown gunman or trampled to death in May Day demonstrations in Taksim Square in 1977.

Officials also cited intelligence that attacks could be planned. Bombs attacks from leftists and PKK militants are a regular occurrence in Turkey, though rare in Istanbul.

Unions insisted to go ahead with the mass meeting in Istanbul, Turkey's financial capital, in defiance of the government ban.

"There are necessary reasons for this, and this has to be understood. Taksim Square has a lot of traffic, and it's difficult to control," said Interior Minister Besir Atalay.
Last Mod: 30 Nisan 2008, 17:17
Add Comment