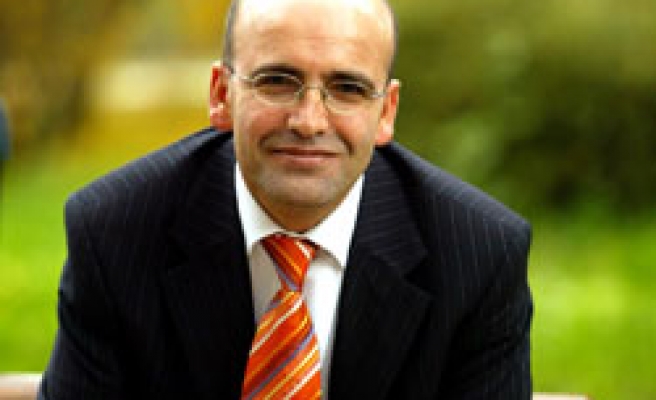 Turkey's economy can withstand global economic turmoil, Economy Minister Mehmet Simsek said, to the point that a new IMF stand-by agreement is not needed and is indeed "unlikely".

The International Monetary Fund's $10 billion loan agreement with Turkey, which expires in May, has been an anchor for Turkey's economy, helping it rebound strongly from a financial crisis in 2001.

"I feel comfortable the public sector can carry on without additional funding from the fund. So a stand-by arrangement is unlikely," Simsek said in a late interview with Reuters on Monday.

Simsek was in the United States for speaking engagements and meetings with investors. He will hold talks with IMF Managing Director Dominique Strauss-Kahn in Washington on Thursday.

"No decision has been made. That decision will be made by May," he said, noting that due to parliamentary delays there is now a need to merge all outstanding reviews and try to complete them before the IMF program expires.

Parliamentary approval of the reform, which will raise retirement ages in Turkey, is a pre-condition for the IMF to release a $1.3 billion loan tranche to Ankara.

Simsek reiterated he thought the reforms would be passed in the next two weeks.

"I am optimistic, I am hopeful, that it will clear the parliament over the next week or two," he said. "I would give it an 80 percent chance (of passage)."

"We will not have extra-budgetary funds. If we need additional funding to finance human capital or infrastructure investments, we will do it in a transparent way that will be through budgetary procedures," he said.

Turkey has borrowed $2 billion out of an expected $5.5 billion from international capital markets this year so far. Simsek said the country could, if need be, go without external financing for two years if market conditions did not improve.

"If lets say the markets remain closed, right now obviously not only for us but for everybody, we can live. We can essentially survive not coming to the market for two years very comfortably," he said.

"Why? It won't be a pleasant experience but we have a pipeline of privatization receipts, most of which are hard currency, over $5 billion. These are for this year," he said, adding more privatizations are to come.

But Turkey is vulnerable to the vagaries of the global financial system due to its large current account deficit. It grew to roughly $38 billion, or 5.6 percent of GDP, last year.

Inflation risks from high food and energy prices and a drop off in the growth rate, which averaged 7.4 percent over the past four years, are raising questions.

Simsek countered that with the strength of the banking sector, citing return on equity in 2007 of 24.9 percent; a capital adequacy ratio of 18.8 percent; and a non-performing loan ratio of 3.5 percent, of which 90 percent is fully provisioned.

Simsek, noting the troubles in the global economy and the fire sale of No. 5 U.S. brokerage Bear Stearns after it faced what amounted to a run on a bank, plus a serious legal challenge to his AK Party at home, said the economy faced sub-trend economic growth.

"Yes, we will be affected to the extent of credit availability and pricing of credit for the Turkish corporate sector changes. That may mean sub-trend growth," he said.

"We think trend growth in Turkey, meaning potential growth, very comfortably you could talk about 6 percent. So sub-trend growth, you could say 4 or 5 (percent). Is it the end of the world? No. Not a big deal."