Turkey and Armenia will play a qualifier on September 6th, 2008 for the 2010 World Cup finals in South Africa. 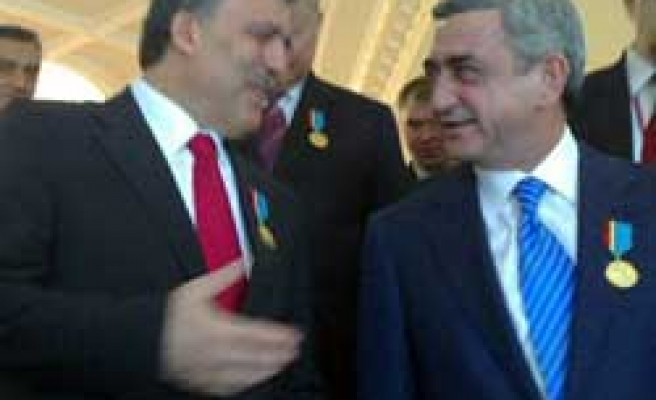 Turkish Ministry of Foreign Affairs spokesman Burak Ozugergin said on Thursday that the ministry had been evaluating the proposal of Armenian President Serzh Sargsyan who invited Turkish President Abdullah Gul to Armenia for a soccer match between Turkey and Armenia.

Turkey and Armenia will play a qualifier on September 6th, 2008 for the 2010 World Cup finals in South Africa.

Referring to the statements on normalization of Turkish-Armenian relations, Ozugergin said Sargsyan earlier made statements for a fresh start to bilateral relations.

Turkey will host Armenia on October 14th, 2009 for a European Qualifying Group 5 match.

Spain, Belgium, Estonia and Bosnia-Herzegovina are the other teams in Group 5.

Armenian president Serzh Sarksyan ealier invited his Turkish counterpart to visit Yerevan for a football match in September, marking a shift in relations between the two states which have no diplomatic ties.

"Sarksyan has sent a formal invitation to the president of Turkey, Abdullah Gul," said Samvel Farmanyan, the Armenian president's spokesman.

Turkey broke diplomatic relations with Armenia in protest against Yerevan's occupation of Nagorno-Karabakh region over which Armenia attacked Turkey's ally Azerbaijan in a war in the 1990s. Turkey was among the first countries to recognise Armenia's independence after the 1991 fall of the Soviet Union.