FM Babacan said that Turkey was ready to do everything necessary to solve the controversy through dialogue. 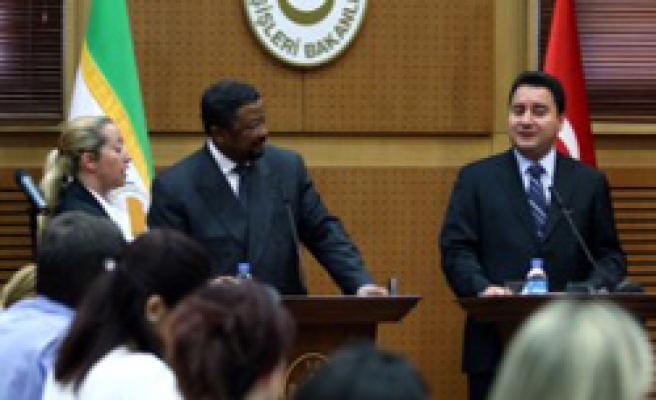 Foreign Minister Ali Babacan said that Turkey was ready to do everything necessary to solve the controversy through dialogue.

"Turkey is in good dialogue with six countries that have presented a new package of proposals to Iran, and also it has a good dialogue with its neighbor Iran," Babacan told a joint press conference with Jean Ping, chairperson of the Commission of the African Union, in Ankara.

Babacan told reporters that his Iranian counterpart Manuchehr Motaki would visit the Turkish capital on Friday, and he would discuss many issues, including nuclear program with the Iranian foreign minister.

"Turkey has always supported solution of Iran's nuclear program controversy through dialogue, and therefore it continues talks with all parties," he said.

Referring to Turkey's cooperation with Africa, Babacan said that Turkish non-governmental organizations were active in many African countries and Turkish businessmen were particularly working in North Africa.

He added that projects were underway in 37 countries in Africa through TIKA (Turkish International Cooperation & Development Agency).

Babacan recalled that Turkey was chosen as observer country for African Union in 2005; and was declared strategic partner for Africa in 2008. He added that Turkey joined African Development Bank in May, 2008.

Babacan said it was important that Turkey, as a country which did not take place in Africa, had become a member to that Bank.

Ping, in his part, said that Africa was a continent which had a future, and the population of the continent would reach 1.4 billion by 2020.

Ping said that African continent offered big opportunities in terms of raw materials and other wealths. He added that 95 percent of many raw materials in the world such as diamond and iron took place in Africa.

Ping said that Turkey had a very important strategic location where Africa and Middle East met, and Turkey was very valuable for Africa.

"We are looking at the continent of Africa with a long-term and lasting approach, not with a short-term perspective," Babacan told reporters.

Babacan said he was hopeful that Turkey and Africa could cooperate in many areas thanks to fast-growing Turkish economy and Turkey's increasing political influence in the world and high potential in the continent of Africa.

Ping said that Turkey and Africa should have a multi-lateral cooperation, from which they could have mutual benefits.

Ping said that Turkey could contribute to efforts to end regional disputes, and disputes in his continent (Africa), and added that the commission's aim was to launch long-term cooperation that was not affected by internal policies.

The African Union is an intergovernmental organization consisting of 53 African nations. Established on July 9, 2002, its objectives are to accelerate the political and socio-economic integration of the continent; to promote and defend African common positions on issues of interest to the continent and its peoples; to achieve peace and security in Africa; and to promote democratic institutions, good governance and human rights.