Turkey and Iran signed a series of agreements to further cooperation in a number of areas, but fell short of signing an energy deal that US had opposed. 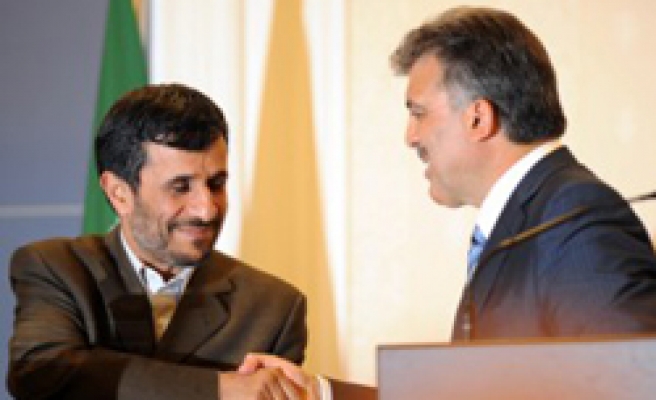 Turkey and Iran yesterday signed a series of agreements to further cooperation in a number of areas, including terrorism and organized crimes during a landmark visit by Iranian President Mahmoud Ahmadinejad, but fell short of signing an energy deal that US had opposed.

Neither side gave a reason for the delay but stern faces by Turkish and Iranian officials at the Ottoman palace where the talks took place suggested a sombre mood, Reuters said.

"I think Turkey cannot afford politically to make a deal with them now and that's why it failed," said Soner Cagaptay, Turkish Research Program director at the Washington Institute.

Following the meeting, Turkish Interior Minister Besir Atalay said that a committee would be established to follow illicit drug trafficking, illegal migration, human smuggling and various other crimes both in Turkish and Iranian parts of the border.

The statement reminded that Turkey and Iran held various meetings and signed several documents in 2007-2008 as being aware of the importance of energy sector in their economic development.

"Parties have reiterated at the highest level their desire on further developing projects and activities in the framework of their ongoing cooperation in the fields of natural gas and electricity. In this framework, they have exchanged views and information on various energy projects being carried out to benefit of both countries and agreed to support the projects, as one of the options, that would make possible the transportation of natural gas from neighboring countries of Iran to Turkey through Iranian territory," said the statement.

The statement also said, "Turkey and Iran have also noted with satisfaction and expressed their support for the ongoing studies performed by their relevant competent institutions and authorities and progress achieved in this respect on the improvement of the electricity interconnections and electricity trade between their countries as well as the construction of hydro and natural gas power plants."

Ahmadinejad said that development of Turkish-Iranian relations would not be disadvantageous for any country, on the contrary, it would be for the interest of regional security and international peace, in a joint press conference in Istanbul.

Upon a question about Iran's nuclear program, Ahmadinejad said that Iran's nuclear program was neither a technical nor a legal problem; it was completely a political problem. He added that they had recorded an important progress in this issue, and all parties agreed that the issue could be solved through dialogue. He said that Iran welcomed dialogue.

Ahmadinejad stressed that Turkey had always undertaken a positive role in this issue.

Gul said that relations between Turkey and Iran would contribute to stability and peace in the region as well as world peace.

After Russia, Iran is the biggest provider of gas to Turkey.

Bilateral trade is estimated to reach $10 billion this year.

Turkey fears that a possible U.S. or Israeli strike against Iran will plunge the region into turmoil and hurt Turkey.

Gul and Erdogan have sought to boost Turkey's role as a mediator in regional conflicts.

Last year Ankara and Tehran signed a memorandum of understanding to export Iranian gas to Europe through Turkey, including a provision for Turkey to produce 20.4 billion cubic metres of natural gas in Iran's huge South Pars gas field.