Turkish Cypriot President Talat had talks in the Turkish capital during which he discussed strategy for the coming weeks. 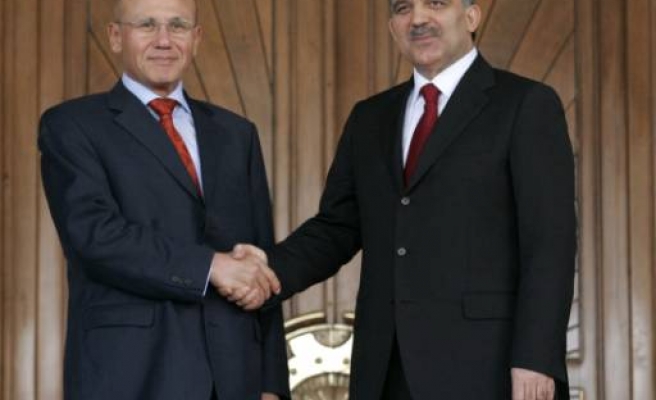 Turkish Cypriot President Mehmet Ali Talat had talks in the Turkish capital yesterday during which he discussed strategy for the coming weeks, when stalled talks on reunification of the divided Mediterranean island are expected to restart.

Newly elected Greek Cypriot leader Demetris Christofias, whose election on Feb. 24 renewed hopes that the 34-year-old division of Cyprus would be resolved, was also holding talks in Athens as of yesterday and said that he expects to meet with Talat some time between March 17 and 24.

Hours after winning the election, Christofias said he wanted to meet with Talat to discuss how to restart stalled peace talks, but no date had been set for the meeting.

"I expect the meeting with Mr. Talat to occur between the 17th and 24th of this month," Christofias said during a news conference in Athens, where he was ending his first official foreign visit as the new leader of the southern part of the divided island.

"It is my wish, yes, to resolve the Cyprus issue during this five-year term ... that's my aim," he said. "We will work tirelessly for this, but this also requires the cooperation of others."

Cyprus has been divided between a Greek Cypriot south and a Turkish north since 1974, when Turkey intervened after an Athens-backed coup by supporters of a union with Greece.

Ankara does not recognize the Greek Cypriot government, which entered the European Union in May of 2004 as the official representative for the entire island.

Stalled efforts to reunite Cyprus are hampering Turkey's chances of joining the EU. The Greek Cypriots represent the island in the EU, with veto rights over the admission of Turkey to the bloc. The EU partially suspended Turkey's EU accession talks in 2006 over its refusal to open its ports and airports to Greek Cypriot traffic.

Ankara has consistently called for steps to end the international isolation of the Turkish Cypriots after they voted for a UN plan to reunite the island in 2004, but despite pledges, particularly clear ones from the EU, there has been no significant progress since then.

As of Wednesday Christofias said in Athens that although his first meeting with Talat would be "exploratory," he hoped the two would agree to open two new crossing points on the divided island. One would be at Ledra Street, a busy pedestrian thoroughfare in the heart of Lefko?a, and the other at Limnitis in the island's northwest.

Ledra Street has come to embody the island's division and opening a crossing there would be highly symbolic. Five crossing points have been opened since Turkish Cypriot authorities relaxed restrictions in 2003.

Talat has said he believes there is hope for resolving the Cyprus problem by the end of the year. Christofias has said the ultimate goal would be to have a unified, demilitarized Cyprus.

The island has two sovereign British bases, created when the British colony gained independence in 1960.

"We have no plans to touch the [British] bases ... but full demilitarization of the island remains a long-term goal," Christofias said. He also said Greek Cyprus would not recognize Kosovo as an independent country "out of respect for the territorial integrity and sovereignty of Serbia."

Greek Cypriots fear Kosovo's secession could act as a precedent for the KKTC, which is recognized only by Ankara.