Turkey's foreign minister is actually in New York to lobby for election of Turkey as a non-permanent member of the UN Security Council. 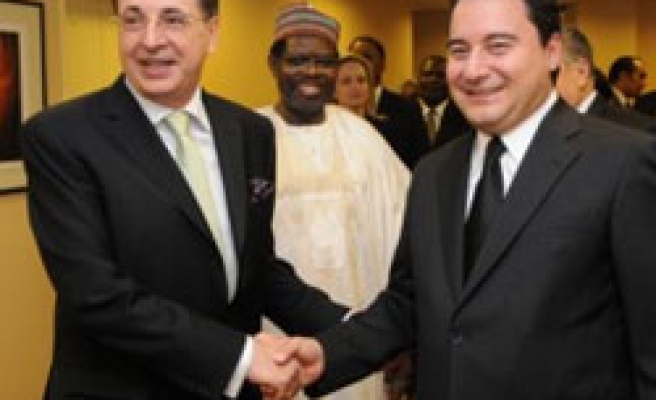 Foreign Minister Ali Babacan met Srgjan Kerim, the president of the 62nd session of the UN General Assembly, in New York and expressed Turkey's wish that the UN should be a more effective, influential, representative and functional organization.

Babacan also gave the message that the UN should continue being in the middle of the picture for settlement and preservation of world peace and stability.

Turkey's foreign minister is actually in New York to lobby for election of Turkey as a non-permanent member of the UN Security Council.

During his meeting with Kerim, Babacan underlined importance of UN's taking an effective role against global problems caused by hike in oil and food prices and environmental problems.

Babacan briefed Kerim on Iran's nuclear file and the dialogue launched between Syria and Israel, and said that Turkey backed "dialogue" in settlement of disputes, and assumed an approach "embracing every one, not excluding them."

Also speaking in a meeting of underdeveloped countries, Babacan said that problems faced in development could not be overcome by financial assistance, but required collective approach.

Babacan highlighted importance of developing a "multi-lateral" approach to problems like energy, food crisis, hunger, AIDS and poverty, and gave a message that assistance and cooperation would be maintained to help underdeveloped countries to achieve their development goals.

Turkish minister Babacan also had a meeting with the Latin America and Caribbean group in the UN, and said that there would be geographical distance between countries but what brought countries together was the values they shared.

Babacan said on Tuesday that Turkey stood a good chance to get a non-permanent seat at the UN Security Council (UNSC), however, added that efforts should continue till the last moment in such election process.

Ambassador Baki Ilkin, permanent representative of Turkey to the UN, hosted a reception in honor of the representatives of other countries at New York's Turkevi on Tuesday.

Speaking to reporters at the reception, Babacan said that his visit aimed to get the support of as many countries as possible for Turkey's getting a non-permanent membership at UNSC.

Babacan said he desired to meet and exchange views with permanent representatives of various countries prior to such election.

Turkey not a UNSC member for 47 years

He said he would also meet the representatives of countries from Africa Union, Arab League and Organization of the Islamic Conference (OIC) during his stay in New York.

Babacan said Turkey had not been a UNSC member for 47 years.

"We think that Turkey deserves this seat after nearly half a century. We believe we will be a very active and contributing country when we become a member to UNSC," he said.

United Nations General Assembly President Srgjan Kerim, who also attended the reception, said that Turkey was a very important country both for UN and in its region, adding that Turkey was a constructive actor. Kerim said that Turkey undertook role in Middle East dialogue as well as crisis management in Balkans; it was a connection between Europe and Asia, and a part of Europe-Atlantic integration.

Kerim said that Turkey was an example for developing countries with the reforms it fulfilled.