The first round of a vote on constitutional amendments to have general elections every four years and a popular vote for the president were completed smoothly -- a significant step to add two extra boxes on the upcoming ballot. 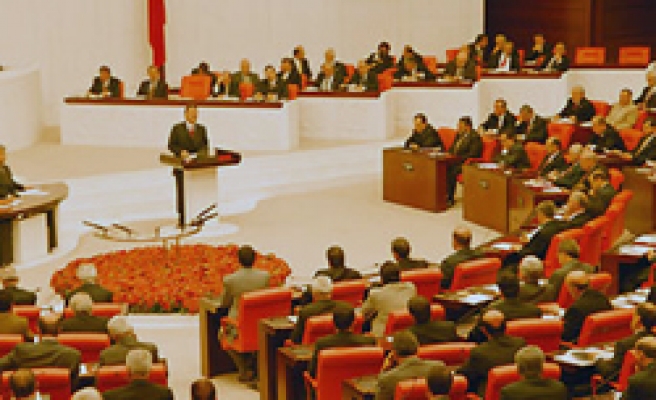 In the first round, all articles received the support of more than 330 deputies, the number of votes needed to go to referendum. The article stipulating the popular vote of the president had the lowest support, with only 350 deputies in favor. The second round will be held today. If more than two-thirds of Parliament approves the package, the amendment will be passed or be put to a referendum by President Ahmet Necdet Sezer. If the package receives the support of 330 to 367 deputies, it will be put to a referendum either automatically or after being returned by Sezer to Parliament for re-deliberation.

If the package, backed by the Motherland Party (ANAVATAN), is passed in the second round, there will be two ballot boxes for voters during the July 22 parliamentary elections. Assuming that Sezer will veto the package twice, the ruling Justice and Development Party (AK Party) is planning to hold the referendum simultaneously with the parliamentary elections. If the package passes in the second round, it can be taken to referendum even if it is vetoed by Sezer. Under a provisional article added by the government to the package, the period set under the Law on Referendums for holding a referendum has been decreased from 120 to 40 days. This will make it possible to hold a referendum simultaneously with general elections.

After this point, the fate of the package will be determined by Sezer. If he approves the package, Turkey will elect both its prime minister and president on July 22. He is entitled to approve the amendment or send it back to Parliament for re-deliberation within 15 days, upon which Parliament may pass it once again without any change and send it back to Sezer, who may wait for 15 days to put it to a referendum. Thus, Sezer may try to delay the amendment's enforcement by 60 days, thereby blocking simultaneous general elections and the referendum.

The AK Party attaches great importance to this simultaneous voting strategy, which it believes will increase its votes significantly. Adamantly opposing the popular vote of the president, the Republican People's Party (CHP) regards this amendment as the greatest victory over itself. The CHP deputies claim that the popular vote of the president is a system change, which they will take to the Constitutional Court.

The constitutional amendment package was split into two separate sets. The first set of amendments is related to holding general elections every four years and seeking a quorum of 184 for meetings in Parliament. The second set consists of the articles pertaining to the popular vote of the president.

The CHP, which had previously applied to the Constitutional Court for cancellation of the first round of the presidential election, submitted another petition on May 4 to the court arguing that the presidential election schedule violated parliamentary bylaws. The CHP claims that Parliament cannot hold legislative meetings when the election schedule is in effect. If the top court accepts the CHP’s application, then eyes will turn once again to the Supreme Election Board (YSK). In this case, under the Constitution, elections must be held in 90 days at most. However, there is no lower limit of 45 days to this schedule. The currently set election date, July 22, is within this time limit. Therefore, the YSK is not expected to change the currently set date. At this point, the election date can only be changed by parliamentary decision.

The government has retreated from a constitutional amendment decreasing the minimum age of election to Parliament to 25, fearing this may eventually lead to changing the currently scheduled date of July 22 for general elections. If this amendment were to be adopted, the election date could be changed upon individual application, it is said.

The government’s decision to backtrack from the age amendment most benefited the Democratic Society Party (DTP), which had previously declared it would enter Parliament with independent candidates. The number of seats the DTP would secure would have decreased if the names of independent candidates were added to the ballots, political analysts say. This provision was reportedly added to this amendment in order to prevent the DTP from securing a large number of seats.


Kuzu: Package will not be null and void

Parliamentary Constitution Commission Chairman Professor Burhan Kuzu: “The deliberations on the constitutional amendment package are under way irrespective of the parliamentary elections. Under normal conditions, the package would not be null and void. The process may become shorter or longer, but it will not lapse. The Parliament will pass it and send it to the president, who may send it back to Parliament, which will then send it back to the president. No obstacle is on the horizon. The entire process is well defined under the Constitution. No intervention can be made to this process. The process will operate normally. Ballot boxes may be placed simultaneously or separately. It is not important. What is important is the continuation of the process. The early elections issue has already been settled. The countdown to the early elections is ticking away. There is no provision banning Parliament from working if it has decided to hold early elections. All other things will be de facto situations. And this openly violates the Constitution. Nobody can prevent Parliament from working.”